I had only been on the Eurostar once before, and that was 18 years ago. Not only did they now depart from the reborn St Pancras station (rather than Waterloo), but there were a new generation of trains. I liked the check in system at St Pancras, and was only sad that that the champagne bar above the platform was closed for my visit. Security and immigration were a doddle, and my luck was in – I found a seat, from which I people watched and nursed my stomach, ravished by cramps from something I had eaten that it clearly didn’t agree with. 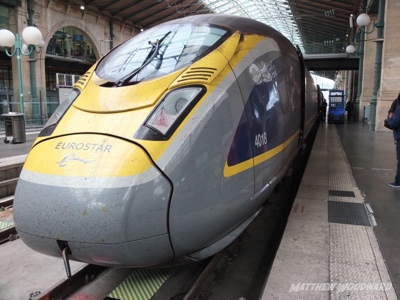 There were three trains departing in the next hour, one to Disneyland, one to Paris and one to Brussels. Identifying passengers headed to Disneyland was easy. They were either (a) wearing Mickey Mouse ears, or (b) carrying vast quantities of Trans-Atlantic baggage in suitably garish colours, or (c) all of the above. Once they had set off I readied myself, but an announcement was made about a “small technical problem” with our train. The delay was only 20 minutes, but it made me think about the consequences for anyone with a tight connection.
I positioned myself with a hopeful crowd at the escalator gate to platform 9, and waited for the doors to open. Propelled forward amidst a party of school kids, I was distinguishable on the escalator as the only person not wearing a red school baseball cap. Up on the platform there were two trains, our delayed service and the next one, and I quickly found carriage number four on board my train – a new E320 Eurostar. What was unusual about my carriage was it had a film crew on board, the full smash with loads of equipment. I found a rather nice PR lady sat in my seat. We agreed that it was my seat, and with a lovely smile she admitted that she didn’t even have a reservation. “We booked the whole carriage” she explained. A few of the production crew were surprised I had a ticket in the middle of their film set, but we agreed I had a valid ticket for seat 63 in coach 4. 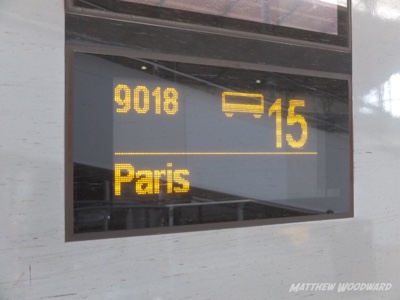 A couple of the creatives gave me a good look over, and I heard one woman say to the other “he’s okay there”. It seemed like I might have a part to play, so kept quiet about my lack of an Equity card. They were all rather nice and chatty, like I might be in the green room before a popular TV show. I only hoped make up were on board too. It was about at this time that one of the film construction crew felt something was wrong. “This is your train?” he asked me. I thought it was much my train as his train, but I got my ticket out once again and showed him too, as if to make my presence legitimate to the film crew. He pondered over it for some time. “But this is the 11.24 – you are on the 10.24 – I thought we had the whole of this carriage”. And so the situation dawned on me. Opposite me on platform 10 was my train, about to depart. It was a cock up of Mr Bean proportions, and all my fault. How could I be such a fool? I was supposed to be a long range rail adventurer, but yet I had just made the most basic schoolboy error in my blind rush for baggage space. I then got to re-enact that train scene from the much under rated 1980’s John Cleese comedy “Clockwise”.

I looked at both end doors to the carriage I was in, now blocked by cameras and scaffolding, said goodbye to the posh PR lady and legged it. “You’re on the wrong train” the conductor told me as I got myself back onto the platform. Top marks for stating the obvious, if only he had been there to direct me before I boarded. Fortunately I didn’t have time to be embarrassed. My train was making final preparations to depart, but as a result of the delay it wasn’t clear exactly when. My bag was still in the wrong train at the other end of the coach. I had to make this my priority, so ran down the platform and extracted it. I almost made a clean getaway, but was blocked by more film type scaffolding being carried on. Once I had persuaded them to reverse, I made it back out and bundled myself and my luggage into the door of the train on the opposite platform. Thank heavens my bag only weighs 13 kg this trip. I’m sure it wasn’t the advertised platform, but it was clear on the door display, and I just hadn’t paid attention. I hadn’t even had time to find out what the film was. Had I just turned down a part in a Hollywood blockbuster? Only time will tell, as I shall recognise my carriage and my seat on the set.
I was surprised to find space for my bag as the last passenger on the train, but I did. I was in second class but the seats were spacious enough. The carriage was a mixed bag of businessmen on cheap tickets, a party of school children (the red caps – I should have followed teacher) and well dressed women off for some major retail therapy. I hope they hadn’t seen my performance on the platform. No one seemed to notice me inside, so I shuffled to my seat and hoped that I might have got away with it and my rail adventurer credibility was still in tact.

I’m a big believer in the luck that comes from something going wrong early in an adventure. What had just taken place was a timely reminder, a “get a grip” moment, but hopefully the only major glitch for this mission. 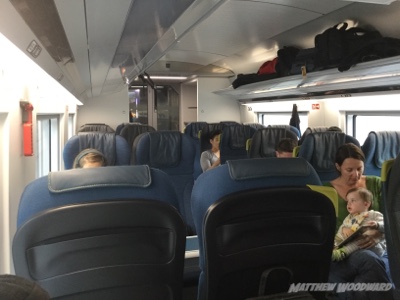 Emerging an hour or so later from the channel tunnel, we streaked through the French countryside towards Paris at just under 300 km/h. The sun came out as we ventured further inland, something that improved my mood somewhat. With my minimalist packing I was dressed in just shorts and sandals. I must have been thinking Greek beach when I chose my wardrobe. Although the train was full, I was happy with my big new seat in second class, if only I wasn’t feeling a bit unwell. Anyway, there was no time to get depressed – I had some more trains to catch today.