I’m back on the train. My plan is a bit mad, and even I can’t remember why I decided to do this. I’m on the Z266, which runs daily from Lhasa to Guangzhou. It takes three days. This is a big trip, but yet in my mind I’m treating it like a short journey for some reason. I bet I am actually the only person travelling the full 4390 km to Canton. How many Chinese people would want to do this? Perhaps like wanting to take a single train journey from Edinburgh to Istanbul.
I’m on a Z train again, and to prove that “Z” trains are really not actually that slow, this train only makes 11 stops in total. Tomorrow it will stop at Lanzhou at lunchtime (12.49), then not again until it gets into Zhengzhou later the next morning at 03.13 – a journey of over 14 hours and 1200 km between stops. I should not underestimate the distance and good speed that we are covering – it is nearly 20% of my total trip mileage owing to the good average speed. 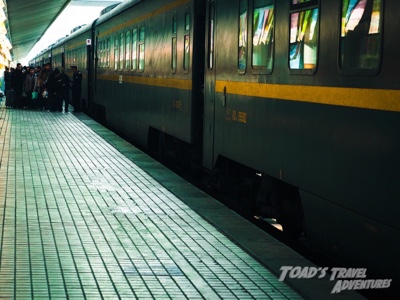 Lhasa station is pretty new, and once you are inside it is a fairly easy place to navigate. I’m sad to report that my lucky black handled Swiss Army knife has been seized by the police here. This is a shame as it has covered the last few years of travel with me and has opened some quite interesting bottles of wine. After surrendering it I realise that I could probably have just offered up my cheap KFS set that I keep in the same part of my bag – I don’t think their x-ray machine actually revealed my scary Swiss Army knife, it was just a random question as foreigners tend to have such things. Nothing I can do about it now, so no point in getting fraustrated..
Once on board the carriage seems a bit different to the Z21 service that I used to get up here. My first reaction is that it is slightly more civilised. So far I am sharing with a couple of Chinese chaps going to Xian. They have been super helpful rearranging the place and making space for my luggage – the spaces in this carriage type seem quite small.
I’m in carriage No 6, berth 25. The good news is that it’s a lower bunk this time. The mountaineering up to the top bunk on the last train was hard work at night, and I’m glad not to have to repeat this (although my technique was improving). There appears to be no extra oxygen being pumped in at the moment. In just a couple of hours we will be back up at the Tangulla Pass at over 5000m, so I would happily have some were it on offer. On the plus side, altitude will cease to be a problem later on tonight when we get back to Golmud, so all things being equal, some sleep might be on the cards. 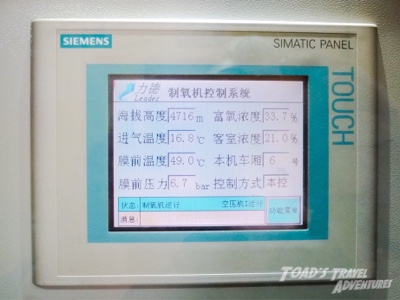 Chinese rolling stock is more modern than you might think it to be. I think the carriages often look older than they actually are because of the way that they are painted in a dull green colour (If I were the Marketing Manager for Chinese railways I would immediately rebrand and paint them all in some sort of more modern and appealing “airline” style). At one end of our carriage there are some pretty sophisticated climate control systems – I can read the exact altitude, and even the pressure inside the carriage. 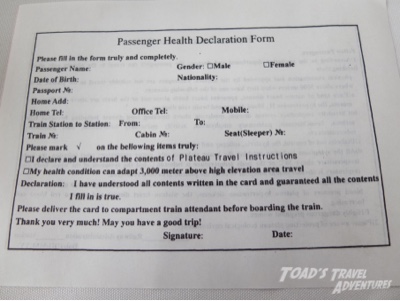 Rather bizarrely I have just been made to complete a “health declaration”. No form was required on the more challenging route up to Lhasa, and we have set off today from over 3500m. Anyway, it’s no problem once you have an English version of the form. I had a Chinese one at first, and thought it might actually be a tax return.
The drill here is to doze and sleep whenever you think you can, because when you normally would be trying to sleep it might not be possible. The door has been open to our compartment and whenever I look up there are a couple of Tibetans or ethnic Chinese standing there staring at me like I am an alien from another world. This gets quite tiresome, but I’m not closing the door, as I like the open “drop in” feel of the carriage. The kids also like to shout “hello” at me and then disappear before I can further test their English.
Later on in the day we leave the specially constructed permafrost part of the line, and the train immediately speeds up to express speed. I decide to switch from speaking Tibetan back to Chinese at this point. It’s not a big deal though, as I speak perhaps a dozen words of Chinese and only four of Tibetan (“Tashi Delek” and “Tujay-chay”).
I have noticed the marked effect that altitude has on my appetite. I really haven’t been interested in food for a few days. I have eaten nothing again today. I am going to force myself to eat some instant porridge for breakfast tomorrow. Signing off from the Z266 for now.