My arrival in Hong Kong has feels like a bit of an anticlimax at first. It’s not like anyone was there to greet me or say “well done, old chap” or “are you the only person to have ever completed both the Trans-Manchurian and the Qinghai-Tibet railways in one journey?”. I walked the streets of Kowloon amongst throngs of tourists who had no idea that I had just joined them by taking the train from Edinburgh Waverley to Hung Hom, not to mention a side journey to Lhasa. I was very careful at first not to tell everyone what I had done, but did occasionally drop it into polite conversation after the odd beer. As if I hadn’t had enough of the rails, on my single free day I hopped on a local train from Hung Hom to a place called Taipo Market. It’s close to Shenzen, and about five minutes from the place that I crossed the Chinese border the other day. 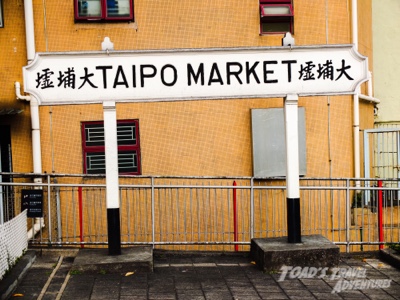 The plan was to sample some edgy food in some local restaurants – the sort of places that don’t have menus. The expansion and growth of Hong Kong is such that you have to travel this far out to find such places. Even the New Territories are today full of branded chains that you could find in any big city. But in Taipo the brands have yet to arrive, and the family run places are still there. All you need is someone who knows where to find them. Cue Silvana, my “Cantonese Girl” and foodie guide for the trip. 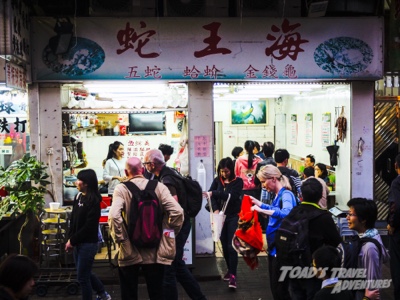 My afternoon was busy sampling all sorts of things, but towards the top of the list was the crispy goose (I acquired a new and unexpected skill – I can now sex a goose by looking at its head), and the snake.
My snake experience wasn’t quite the one that I was expecting to be telling you about. The place we visited was run by a well known purveyor of snake in the Hong Kong restaurant industry. I was told he was in fact the “go to guy” when the police had any major reptile problems. But sadly he wasn’t there when I visited. I like to think maybe he was on an emergency call out to capture a vicious Python from someone’s apartment in Causeway Bay. Anyway, back at the Snake House I tried the snake soup, served with snake broth and dried shredded lemon leaves. Snake wine was optional, unless you needed a boost of virility, in which case it was essential. 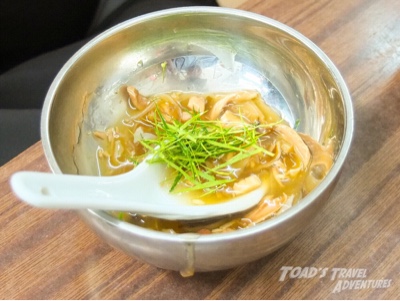 I was both surprised and a little disappointed to discover that my snake wasn’t actually from Hong Kong. It wasn’t even from mainland China. Apparently there are now laws that prevent the export of mainland Chinese snake, even to Hong Kong. My snake today was in fact from Indonesia, which seemed a little unnecessary. Having read the fantastic book “Big Snake”, by Robert Twigger, I happen to know that Indonesia has some of the biggest snakes in the world. But in the same way as getting your asparagus from Peru or your tomatoes from Tenerife back home, it felt slightly wrong.
I returned to Kowloon in time for a few cold beers and an early night. I needed to prepare for an unfamiliar experience the next day – that of taking an aeroplane. The beers were German and remarkable for both their cost as well as their refreshment quality. I allowed myself a little smug reflection on another mission accomplished, this one definitely being the longest and most physically demanding that I have completed so far.
Although (perhaps understandably) I feel a little ambivalent towards travel by train right at this moment, I suspect in just a few months I will be sat back in expedition HQ looking at large maps and thick timetables once again. I hope you have enjoyed reading about this journey. Do let me know what you think.

8 Comments on “The Snake House”

Very enjoyable read throughout. Eagerly await more adventures, on and off the rails. Phil

Great narration of a fantastic journey Matthew. Let's get a few beers organised sometime in the summer- I can regale you with Cuban stories by way of swapping tales Rob W.

Really enjoyed reading this, Matthew. It sounded like you had a few more 'lows' then some of the other trips, but I hope it was worth it overall.

Great following your trip ,Hope to follow your next journey and has now got me started planning my own trip
Cheers
James

Thanks for the comments. Glad you enjoyed it. I hope I have not put anyone off with my honesty on my Chinese train experiences this trip! On reflection the destination (in China) is likely to be indicative of standards onboard – based on those travelling on it, if that makes sense..

I have written professionally for several decades and just happened upon you. I enjoy your style and wit and will read other of your travels…thanks.

Thank you Vinny – that's kind of you. I'm trying hard to improve my writing style as I progress with my new found "occupation"!