My second day on the Z266 train from Lhasa to Guangzhou begins with a gentle but firm tug on my ankle. It is the guard. We go through the Chinese train ritual of me returning my train plastic gold card in exchange for my original ticket (I think they do this so they can remind passengers when they will be getting off at the next stop). Then she surprises me by getting out her smartphone and pointing to the words “change train”. This wasn’t in the script, as my train was already going to Guangzhou. Anyway, I shall go with the flow – at least she has given me an hour to prepare. I checked my diary for the day, and it was blank, so I added “Z266 – change trains at West Xining”. 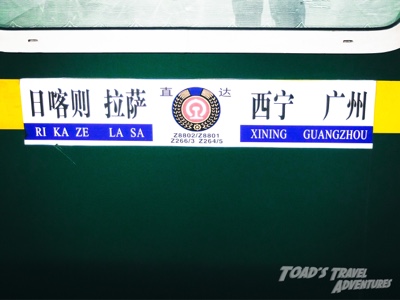 I have to report that physically I’m in bits this morning. It’s basically “man flu”, but with complications. The complications are that I have earache from a pressure squeeze of descending with a cold, and I can’t clear it, as I’m totally bunged up. I have cracked lips and a split tongue owing to the dry air and a desperation to get enough air in my lungs. I have a headache, as my body reacclimatises to the normal human range of air pressure, and I have a mild dose of Khumbu cough. I have a stomach ache and I haven’t eaten in over two days. But perhaps worst of all I feel sick and wretched as the locals are openly smoking all over the train and I must have passively smoked a packet of cigarettes already today. I think my lungs are working flat out to get enough oxygen into my system and smoke prevents this. I’m just keeping positive about all this, but secretly I really hope things get better soon. 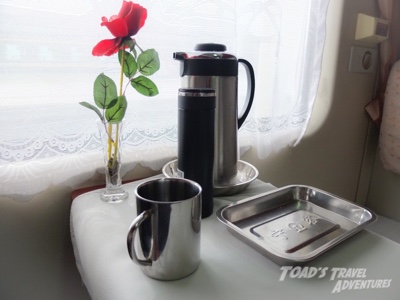 Why are we changing trains? I can only assume it is so they can keep these special high altitude carriages for this upper stretch of the line. We didn’t have to change on the Beijing train, but I am guessing that this is perhaps a less prestigious service and it is a practical use of limited resources. As we slid in to Xining it was clear they had done this before though. They actually managed to match the carriage positioning so the journey to the “new” train was about 10 meters away on the same platform – just a quick game of musical berths really. You have to be a bit of a train anorak to spot the differences between the trains. My view is that in the new carriage the fake flowers are less sophisticated, and there is about six inches less width to the compartment, possibly because the berths are wider. I didn’t mention it to you before, but the single squat toilet on the last train was very, very grim, so I’m hoping that there might be a western type WC on this one.

I’m not going to pretend that I have got too much done today, other than regular consultations with my well equipped expedition medical kit. Eventually I have managed to clear my ears using an old diving technique of blowing my nose whilst squeezing it, yawning and moving my jaw about in a funny way – all at the same time. Thank you PADI. I have now had at least 3 hours sleep in the last 24 hours.

The smoking in this carriage is sending me to the brink of despair. It is by far the worst aspect of Chinese train travel. I actually don’t mind people smoking at the end of the carriages, but they smoke everywhere and ignore the signs. The guards don’t seem to care. I’m also surprised we have not had a fire. The smokers just chuck their butts in the bin to retrospectively hide their openly illegal activities. The bin is full of garbage, but mainly paper towels. Given the atmosphere is enriched air, to me this has the makings of an Apollo 1 disaster.

I hestitate to tell you of my evening experience visiting the WC, but on balance think you should know how things are here. Half of the toilets are locked for some inexplicable reason (working theory – for the staff to use only) so it’s 32 people per WC in soft class. The toilet that is locked is the western style one, leaving just the squat type one open. The first one I went for nearly killed me when I got in. It was a gas chamber, but not of the type that you might imagine. I could handle the faeces and detritus all over the place, but the concentrated smoke from someone’s (unnecessarily) crafty smoking nearly made me vomit and collapse in a coughing fit on the spot. I had to perform an immediate retreat whilst doubled up. The old man outside in a leather coat and matching hat just stared at me and then spat on the floor with a gap toothed grin. He looks guilty of serious cigarette crimes to me. On to the next coach.

The real risk is that get it wrong and you would need some proper decontamination – but yet I’m 30 hours away from a shower. My Crocs are going in the bin at the end of this leg. If you are reading this and this puts you off train travel, please don’t panic. This is an “old school” train – the modern G trains are far cleaner and more comfortable. I also think my train is occupied mainly by pilgrims and farming families from remote provinces. I am not being judgemental, but their outlook on things is very different to my own, and possibly yours as well.

Making an early start on my third and final day, I pass a man sleeping in the corridor on the way to the toilet. I don’t recognise him at first as he is wearing a puffer jacket with an enormous “snorkel” hood. It turns out to be a friendly student I met in the wash area last night. He was busy charging his hugely oversized laptop amidst all the muck and water. He speaks English reasonably well and it’s nice to have a brief conversation. He has that geeky but commercially hungry look about him that tells me one day he will be a billionaire, and probably quite soon. 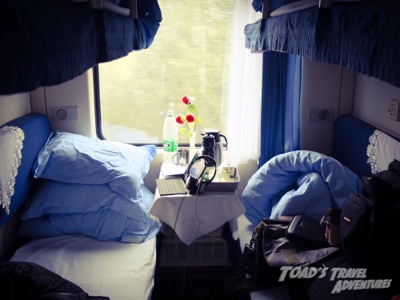 The only other remaining passenger in my compartment gets off at a city called Wuchang at around 10am. Sounds like an 80’s new wave pop group doesn’t it? I now have the compartment to myself, so I reorganise, clear up a bit and then settle down to rest, as I hope to be getting to my destination later today. Outside it is wet and misty, and I have no clue where we are, as I have forgotten to pack the right map (again). Please don’t tell the RGS. The blocks of flats are bigger than any I have seen so far, and they also have individual air conditioning units, so I sense we are on the edge of domestic Chinese prosperity. It’s also a signal that we must be heading south, where the climate would justify such a device, assuming you could afford one.

At this stage in the journey some home creature comforts are getting overwhelmingly big in my mind. I go to sleep dreaming of a home cooked roast dinner (I can’t decide if it’s beef or chicken – I fantasise about both Yorkshire pudding and bread sauce..) and wake dreaming of a perfectly cooked seafood paella. In between these dishes, I also think about steak pie quite a lot. This is odd, as I have absolutely no physical appetite and have been on liquids only for several days now.

To keep me entertained today I have been watching some classic television episodes on my iPad. My favourites have been “Lovejoy” and “Captain Scarlet and the Mysterons”. As an aside, I had forgotten that Spectrum attacked the peace loving Martians in the very first episode, so I think the Mysterons and Captain Black have been given an unfair reputation.

The train is much quieter now as we speed south. I think I am the only person left in the carriage. The guards do what they do best, which is to slope off to the restaurant carriage and drink tea. To be fair though I did spot one of them with a mop this morning – it was a bit of a surprise to both of us I think.

Our altitude is now 28m according to my stop schedule (which has an altitude profile) and I’m enjoying the rich sea level air. Time passes quickly and without the smoke, the shouting and the spitting. I’m beginning to feel quite settled. If only the whole journey could have been like this.

This train has certainly been one of the most challenging ones of this trip, and I will be pleased to arrive in Canton tonight. I considered re-editing this post, but have left it untouched. After all, every adventure has both good bits and not so good bits.

2 Comments on “Reasons Not to Be So Cheerful (Part 2)”

Hi Matthew, sorry to hear about your health and smoking issues! Following your lead we are planning a Trans Sib trip! not sure when, you'll have to advise me over a few beers sometime. Rob W.

That's great Rob. You will enjoy that. Will be in touch.