My time in Warsaw passed far too quickly. After a day out with a local chap called Mariosh whizzing round the Praga district in a converted police van (that’s another story) I got back to my hotel to prepare for the journey to Moscow. Rather touchingly the general manager was there to wish me a safe trip and she kindly said that she would never ever forget me. I could pretend to you that this was because I had inspired her with my love of Warsaw, but the truth was rather more comical. When I checked in had to change rooms owing to some noise from the renovation works. In my new room I then realised that the sound was almost as bad. I was on the spur of asking to be moved again when I noticed that the noise was not actually coming from the hotel, but from my big bag. The buzzing (I had thought it to be drilling) sound was in fact… my beard trimmer. I did the honourable thing, and “fessed up” when I next went down to reception. She found this highly entertaining and made a strange Polish version of a buzzing sound whenever I met her during my stay.

My first point of business in the evening was food. Having been caught out by the PKP fast diet plan on the Warsaw express, I wasn’t going to be “at home” to Mr & Mrs Cock Up again. I queued up at the information counter in Warsaw Centralina station to get some guarantees on the catering arrangements ahead. When it was my turn it became quickly clear that no English was spoken, so I tried again at the Inter City office where there was by now a massive queue. The person I spoke to could not tell me what I needed to know so a supervisor was called, then his supervisor, and before long the whole office seemed to be working on my single question – does the D10 train to Moscow have a restaurant carriage? I felt a lot of eyes staring at me behind my back – people who probably needed tickets quickly to get somewhere important, but it was too late to run now. Finally, the top person (who looked horrified that I had even asked such a question) said there was no onboard catering. With this in mind I hit the supermarket to get rations for the next 24 hours. 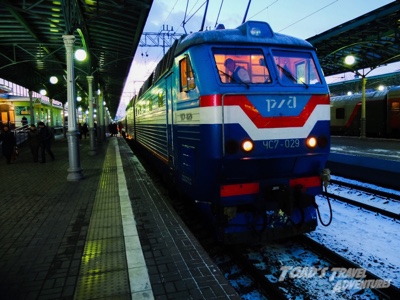 The D10SZ is in its first week of daily service. It is a brand new Russian train that has replaced the D10, which could be either a random set of Polish or Russian carriages. The only down side of the new arrangement was that it was to leave at around 7pm, meaning a long night on the border and a later arrival into Moscow that I would have preferred.

If you have never been to Warsaw Centralina, its basically a big brutal style 1980’s station that operates mainly underground. The caverns and passageways that connect the station to the subterranian entrances are filled with shops, kiosks, travellers and tramps going about their business.

Rule number two in my long distance rail code is to never be late for a night train, so I arrived with more than half an hour to spare. The train cruised in right on time, and my carriage (344) was one of the brand new Austrain built ones. Deeply impressive. It even smelt new, like that new car kind of smell. I unpacked my bag and settled in, changing the berth configuration so I had both a seat and a bed – there were actially four beds as this train now operates as one class, you just decide if you want to share it or not and buy a ticket accordingly. 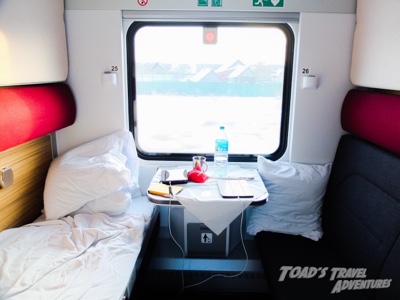 I have some big news to convey to you. There is a shower at the end of my carriage. Yes a real shower, with all mod cons. This is a Russian Railway first for me, and I’m looking forward to trying it out. To find it you just walk into one of the two toilets and turn left – it is inside the toilet next to the outer wall of the carriage. There is nothing to advertise its presence, so you just need to find the right WC. 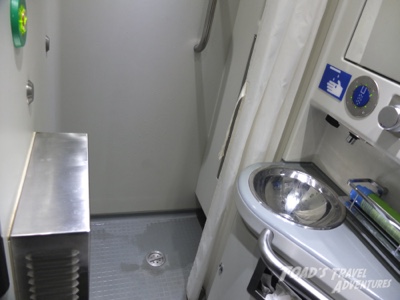 After a couple of hours we reach Terespol, and I have no troubles from the Polish security team seeing off the train over the River Bug to the Belarus side. It’s a super Cold War bridge type border! This is where my Belarus transit visa kicks in (valid for 48 hours) and ties up with my Russian visa entry dates. There can be no flexibility with this, so a precision plan is required.

I made a few schoolboy errors on my Belarus entry paperwork, so a slightly excitable officer marched back and forth with my form asking for more information a couple of times. His boss seemed more relaxed and stamped my visa and wished me well. Customs were pretty thorough and took an interest in all my belongings, especially my medical kit and a Christmas “Red Cross” parcel from the Edinburgh Explorer’s Club that I have no idea of the contents of. Amazingly they accepted this and it remains unopened in my bag ready to go under the Christmas tree on my next train.

On arrival in Brest (the Belarus frontier station) I counted nine officials getting off my carriage before we reversed back out the station and into the shed for a couple of hours of work swapping the bogies of each carriage.

I’m not getting on very well with one of the two providnitsas in my carriage. Her name is Lira, and she has tried to stop me taking photographs in the shed. Does she think that the Russian railway gauge is still a state secret? I cant work it out, but she even pushes me away from the window at one point. I don’t react and just let her get bored waiting for me to take another picture. I would really like to get a smile out of her before the train reaches Moscow, but I might have my work cut out. The border guards are more friendly than she is.

Local time has moved on a couple of hours (to Moscow time) so its not until about 03.30 that we are underway again. There is no point trying to get to sleep before then as the rough shunting of each carriage results in quite a few bangs and sudden impacts. I sleep fitfully but quite well and don’t get up  until10.30 the next morning.

Throughout the night I have been hearing a switch being pushed and a loud beeping noise before it is switched off again. I think this has something to do with the lack of power in my compartment this morning. Thankfully I have my trusty Power Gorilla with me, and can keep all my devices charged up with no difficilty. That gadget has paid for itself many times over in my travels now.
Against PKP wisdom, there is actually now a restaurant carriage, which was attached at the border last night. It’s located right next door to 344 – so an easy walk. It’s a step back to the cold war, and inside the fuggy atmosphere of the creaky carriage I’m greeted by a friendly old chef.

The next few moments are comedy gold, as we don’t have a word in common and I have misplaced my vital “point it” book that I use to speak with pictures. I reach for a Russian translator app on my phone but it is totally useless for ordering breakfast. Chef does a better impression of a chicken than I do of chicken eggs, but thankfully before I chance a breakfast of centrally planned Soviet design, he finds a menu with some English. I need to redouble my efforts and give myself a talking too – my “point it” book should be with me at all times. 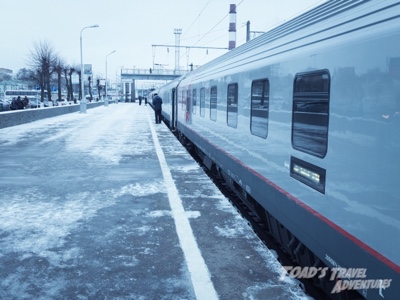 I hoped off for a few minutes at lunchtime to get some fresh air. The train is actually quite short now, maybe four sleeper carriages and a restaurant car. All the standard seated carraiages must have been taken away at the border last night. So the day is spent chugging through the Russian countryside before arriving into Moscow Belorusskaja at 16.20, a journey of about 22 hours. The time actually flies by. I find longer day train journeys much more tedious than this long but more comfortable experience. 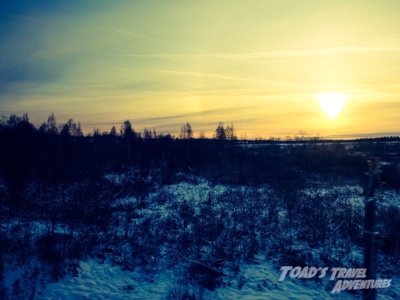 As we cover the last few miles towards Moscow, Lira appears and returns my ticket with a curt nod and a frown. I notice her eyeing up my Power Gorilla recharging my camera, and wonder if this has any connection to the power being switched off in my compartment last night…

I would really recommend this train, but be prepared for a late night followed by a lazy day on board catching up on missed sleep. The first 12 hours are self catering, so pack accordingly.

Thank Mr P – glad you are enjoying it!