I set off from Edinburgh late on a bright December morning. With an already low winter sun behind Arthur’s Seat my old school Virgin East Coast train rumbled out of Waverley Station and chugged south towards the English border. Thankfully no visa formalities are yet required.

I have fond memories of this journey when I used to be a man in a suit, but invairably my journeys would start at a crazy time in the early morning darkness and often finish late at night. But today the sun streamed through the windows of the coach and I sippled fizzy water whilst trying to remember what I might have forgotten to pack. The best I could come up with was some beard oil, so hopefully a good sign that I have indeed brought all the essentials in my overstuffed bag.

First class was full of inter-city shoppers and couples heading off on weekend breaks. They seemed to have few cares in the world, and drank gin and tonic whilst lazily reading the papers. A rather good smelling beef curry tricked my brain into thinking that I might actually be onboard the “International Express” from Bangkok to Penang (one of my favourite trains).

Having just whizzed past a sign pointing back the way I had come from saying “EDINBURGH 50 MILES”, I contemplated that I just had just 20055 km to go until arriving in Kowloon next month. But I was quickly jolted back into the present as the engine put on the brakes and we came to a halt in the outskirts of Berwick upon Tweed. Had Scotland decided not to let me go?

Only in the United Kingdom would the guard announce over the PA that “the PA is not working in all the carriages and if you can’t hear this I would like to apologise”.. A train had broken down in front of us, so we were held for an hour or so until we could switch tracks and “overtake”. As we passed the striken train I could not help but feel sorry for the miserable looking occupants, who I suspect were in for a long day.

As you approach Newcastle at this time of year all you see from the rails are swathes of houses brightly lit with more Christmas fairy lights than you would imagine the National Grid could power at one time. My night out in this fine city was a good one, and included being denied access to a Japanese nightclub as I was wearing my Trans-Siberian footwear. I tried to explain this to the ever friendly bouncer, but I think he just though I was a bit odd. I promised to return in my Crocs next time.

I spent the next day sheltering from the unforecast snow until it was time to get myself down to North Shields to board my ship, the DFDS “King Seaways”. The lady at the foot passenger check in looked a little condescendingly at my luggage. She clearly has not been to Asia via the North Sea before. Anyway she warmed a bit after a quick chat and checked me in to my cabin. Finally she handed me a map which she said would show me where to meet the bus to bring me back to the ferry in Imjuden. “I’m not coming back” I said, and before she could ask any further questions I walked off purposefully towards a big sign saying “TO SHIP”. 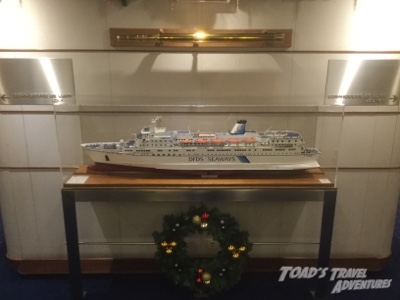 If you have read about past adventures on this blog, you will know how things work on the DFDS ferry between North Sheilds and Imjuden. On board the boat offers a tantalisting flavour of the Titanic, having a separate area for Commodore Class passengers, who have access to their own lounge. I have to say this is a worth while upgrade in my view, as it keeps you at arms length from the party goers who are on a so called “mini cruise”. My night was a peaceful one and I fell asleep in my slightly hot cabin fretting about forward travel problems that don’t actually yet exist. 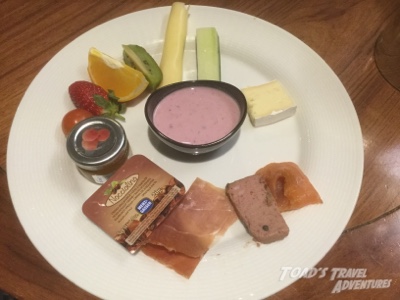 I woke to a discrete tap on the door, and a friendly Philippino crew member served me breakfast. This was a rather strange part continental, part DFDS affair that I could not quite get tuned into.

Amsterdam looked welcoming in the sunshine. The Central station construction project looks now to be finally completed, after several year’s serious work. My top tip is to head up to platform 1 and use the range of bars, restaurants and lounges there – they are far better here than in any other part of the station.

I had just over an hour to wait before my connecting train, and spent it making the most of the facilities and fast wi-fi in the EuroCity lounge. Sadly there was no time to find my favourite Malay restaurant in the red light district on this visit to Amsterdam.