On arrival at Yonanga I need to find the “Yakumo 14 Limited Express” train to Okayama. I have 16 minutes to do this. The snag is that a very nice and helpful platform guard insists on taking me into the station ticket office to make a reservation. I already know this isn’t possible as the train is fully booked, and there is a queue. The clock is ticking. In conjunction with the booking clerk we confirm what I know, but also find out the platform and number of the unreserved carriage. You really can’t fault their willingness to help a gaijin!

Eventually I get an escort to my platform and shown where the “non reserved” carriage will stop. There is a long queue already and it’s clearly going to be rammed full as its a public holiday today. Let’s hope I even get on it. 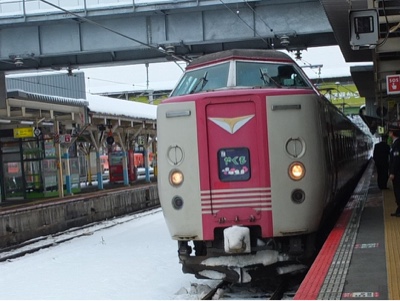 The train looks to me like a mad Gerry Anderson take on a British 1960’s “Deltic” train. The drivers cab is on top, looking down like the cockpit of a 747. I’m happy just to be able to squeeze on, and my home for the next couple of hours is the corridor washroom outside the toilet of second class carriage no 5. Perhaps not the image of tourist friendly image that you have in mind of the Japanese rail network! 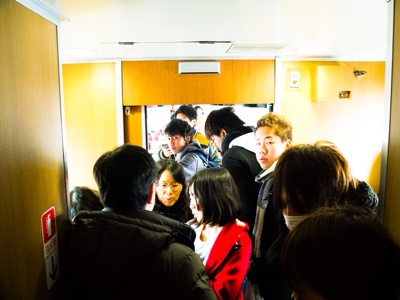 The problem of being here is two fold. Firstly, there is no view of the outside world, and like being in a cabin without windows on a ship, this leads to travel sickness as the train bounces around on its way across rural Japan. Secondly, the toilet is locked and the corridor is full of sick or desperate people about to seemingly have an accident over my luggage, including one poor little girl who I’m convinced is going to be ill right over my carry on bag.

If I had a seat this train would be like any Inter-City train back in the UK. As I don’t, if you imagine getting a train from Kings Cross when the reservations system has failed and you have no seat and the air condititioning isn’t working, it’s very similar.

But it’s only two hours and I manage to do some writing and editing, so time passes relatively quickly. I’m perched next to a punk rocker who helps me work out where to get off – quite important when you can’t see the platforms outside and don’t speak Japanese.

We pull into Okayama on time and I’m relieved to make it off. Now I have to find my Shinkansen connection to Kyoto.