It’s snowing on and off as we arrive in Sakaiminato which surprises me after experiencing a Spring like South Korea. After a rough night in my “cruel cabin” the crew are friendly and calm my mood somewhat. The Purser, who is Phillipino and speaks good English, helped me as much as he could last night. This included the slightly surreal experience of a ship engineer working on the ceiling vent in the total darkness of my cabin whilst people toss and turn in their fruitless attempts to sleep. I suspect that the crew get quite a lot of stick from “difficult” customers, so I only hope I came across as reasonable and diplomatic.

To say I’m feeling pretty rough is an understatement. My muscles ache from constantly bracing against the roll and pitch of the ship in bed, my stomach aches from an overdose of Korean seafood, and my head hurts from dehydration and lack of sleep. I calculate that I have had about ten hours sleep since arriving in Vladivostok four days ago. Once again I get one of the crew to carry my big bag down the perilous gangplank (which he does on his head!) and at last I’m standing on Japanese soil. 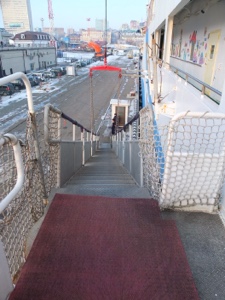 Unlike in South Korea, the order of disembarkation here is Japanese first, “Foreigners” second, then thirdly Koreans. I have no idea why. There are only four Japanese, one Russian and six other Asian foreigners on the ship. Immigration and the Ebola screening goes well, but I’m singled out for special attention at customs.

The officers simply do not believe that I could be here on holiday. After all, what sort of tourist from Great Britain arrives in a place like Sakaiminato with a beard and lots of luggage in the middle of winter? We run through some basic questions using laminated cards translated from Japanese into English, then they start to search my luggage. They clearly haven’t found what they are looking for, so they decide to take me to a side room for a full search and ask me more about my smoking habits. I consider telling them that I’m good friends with Paul McCartney, but decide better of it. 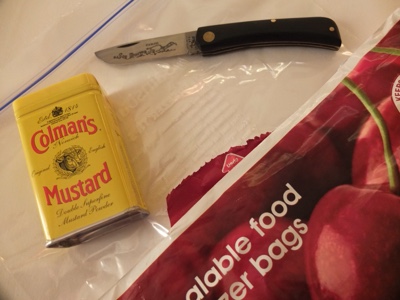 My tin of Coleman’s English Mustard powder is singled out as a possible narcotic, but everything else seems to be fine apart from (rather bizarrely) a roll of sealable freezer bags I’m using to keep my food fresh. There are no questions about my Handpresso machine or my medical kit containing emergency opiate based pain killers and needles. I wonder if they think the freezer bags are to distribute my mustard powder on the street in wrap sized amounts?

As they are still not happy, they conduct a full body search, and this reveals 10040 Korean Wan (£6.42) that I have carefully concealed in my right trouser pocket. They clearly don’t believe my story, which I try and explain further. I discover that the magic words are “writing a book”, as when I say this they decide to release me straight away! It’s funny when you see this kind of stuff on TV “fly on the wall” programmes the suspect is always very nervous and aggressive. I have been the model of charm and good gaijin manners, so I feel a bit hard done by. Anyway, I’m in. 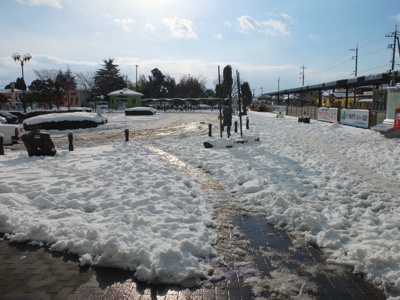 When I get to the terminal building the Korean tour groups are crowding the only exit and my bus to the railway station is leaving. The driver kindly stops and let’s me and my snow covered luggage into his immaculately clean bus to take me to the railway station. It’s deep snow outside and wheeled bags are no use here. Note to self – get an international patent for strap on luggage sledge runners. 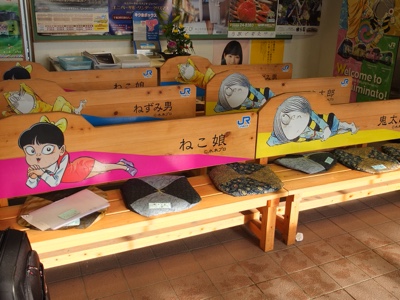 Everything runs smoothly at the railway station and I convert my JR rail voucher into a pass which entitles me to a week’s travel in first class (known in Japan as Green Class) on most types of train. I manage also to make some reservations and sit down in the waiting room to ahead of the arrival of the “manga train”.