It’s just a 40 minute journey on my first train of the day to Yonanga, the nearest grown up railway station. The Manga train, or “Kitano Family Train” as it is officially known, departs about once every hour. 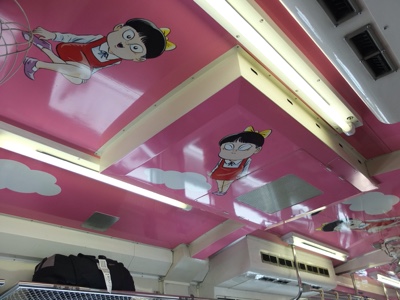 It takes me there in some style, that is as long as you like manga art. Inside the train the station announcements are pre recorded by Japanese children and sound very cute. The conductor walks up and down saying good morning to every passenger personally. 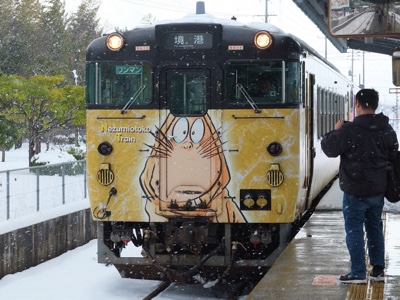 The train is covered in manga art throughout. Each carriage is different, and mine seems to be based on some sort of Japanese “Betty Boo” character. 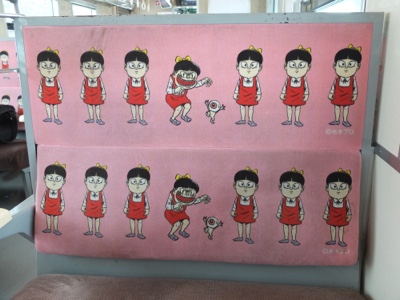 The driver is equipped with a whistle and white gloves and has a well rehearsed routine. It’s a bit like the aircraft carrier lauch scene in “Top Gun”. When he is ready to depart he points his white gloved finger forwards, and waits for a “shooter” man on the platform to give the same signal before engaging the electric motor. 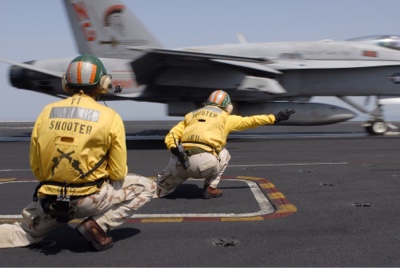 We take off more with the power of a milk float than an F-15 though, but it is totally efficient and stylish way of doing it. I can see through to his seat from where I sit in the carriage. He has a sort of pre departure checklist that he runs through at every stop with his white gloved finger before committing his train to the “take off”.
The guard walks up and down welcoming new passengers. We stop about half a dozen times before arriving at the other end of the line, the local town of Yonago. At one of the stops I see the guard spots an item of litter on the station platform. He darts out of the train to retrieve it as though it might be some sort of safety hazard.