I have managed to escape the madness of Jeongdongjin and made it safely back to the port of Donghae. I spent the day with Taegeun exploring the intricacies of Korean food before resuming my journey to Japan. 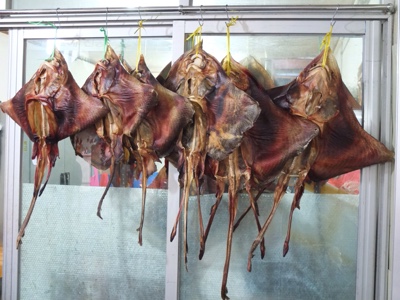 It’s no surprise that dried fish in all its forms is prevalent in much Korean cooking. Other than fish, pork seems to be the main source of meat. In case you are wondering, there is dog here to be eaten, but it does not seem to be a featured ingredient in every day restaurants. I did actually see a man selling dogs, kept in small cages on the back of his truck. To me meat is meat, but I have to say I felt sadder to see this than I thought that I would. 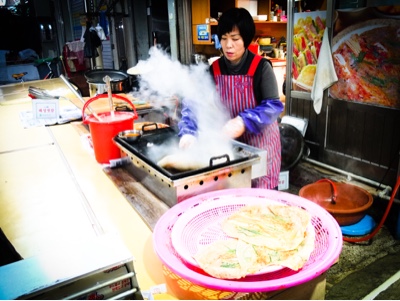 Our mid morning snack consisted of the phenomena that is the Korean “Pizza”. It’s not a pizza in the Western sense, but a fried buckwheat pancake containing kim chi and other vegetables. Explaining the process of making kim chi would take some time, but it’s basically the most important ingredient in Korean cooking, a fermented vegetable in a spicy sauce. 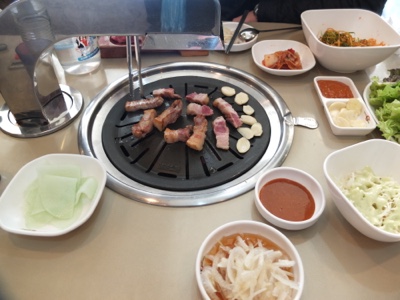 Time for a Korean BBQ for lunch. This consists of three different cuts of pork, self cooked and assembled at the table with the usual range of side dishes – lots of lettuce, chilli and garlic. It’s all to soon time to head down the the ferry terminal in the port. 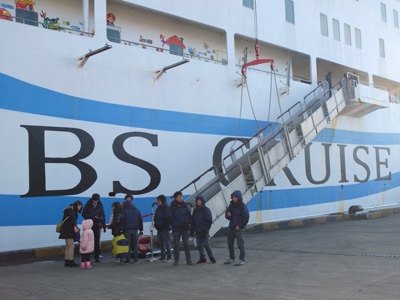 It’s here that I have to say a sad farewell to the amazing Mr Taegeun Kim. He is heading off to his family having been on the road in Europe for over three months. I gave him my lucky Russian Railways pocket watch as a momento of his Trans-Siberian journey. It’s brought me nothing but good fortune, so I hope it brings him good luck to. Time to head back up the gang plank of the Eastern Dream..

Probably just as well I didn’t look at the shipping forecast. Although it’s a nice day in port, it’s immediately clear that the ship is going to be rolling badly tonight. The crew issue a warning (even in English) about walking around the ferry without holding on to something, and advise against going out on deck due to the high wind and waves. Fortunately before we sailed I have taken a quick inventory of the lifeboats and found the best looking one to head for in the event of an emergency – deck 3, port side.. 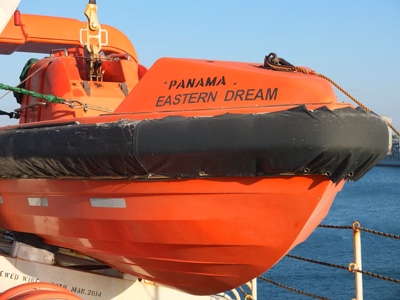 I debate weather eating anything is a good idea given the sea conditions, but decide it’s better to have something to throw up if it comes to it, so I treat myself to a final Korean “pizza” in the bar. Apart from a few shouty people (I can’t work out why, they don’t seem drunk, just very loud) most of the passengers are pretty friendly. My journey is a real icebreaker and I’m soon enjoying a few farewell to Korea toasts of Makguli. 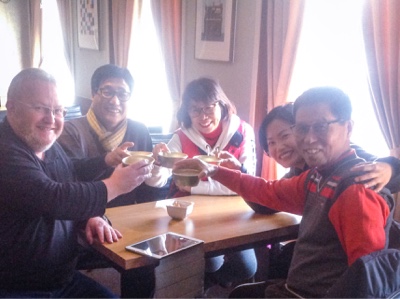 My last night at sea isn’t a good one. I contemplated changing the title of this post to “The Cruel Sea” but that would be over dramatic. The problem is part sea and part cabin, so a better description would be “The Cruel Cabin”. I should point out that it’s not the occupants who are cruel, they are all super well behaved. The problem is there is no ventilation, the temperature feels like the Congo, and the cabin moves badly in the roll and the swell. The ship has no stabilisation and a small sea is all that is needed to recreate something more epic in room 1203. At one point I throw my cards in and go to find a public space to sleep in but this has other problems – an icy wind from the gale, shouty passengers and poor security. The night is a long one and I almost get no sleep at all. It’s the last thing I need, as I have to be at my train best for the logistics of the day ahead.