I am led to believe that Yekaterinburg is one of the great railway stations of Siberia. I’m winding my watch on an hour a day after two hours forward yesterday, so 15.00 Moscow time, and it’s dark.. I’m at 18.00 local, which means I can now visit the restaurant carriage (aka “Robin’s Nest”) for a cold Zhiguli beer. They are playing some mildly irritatingly middle of the road rock music.

We have stopped only three times today, just once in daylight. Most of the stops are for 22 minutes, I assume that this is to facilitate a locomotive change, to take on water, load the post and to do the de-icing. I like to walk up to the front of the train when we stop, but it’s not easy as my carriage is three from the rear of the train. It takes me 6 minutes to do this on an average platform, so 12 minutes of the stop is walking leaving 5 minutes to take a photo and admire the view, leaving a 5 minute contingency. No one will recognise me up front when we depart, so I don’t like it very much, especially in the darkness. 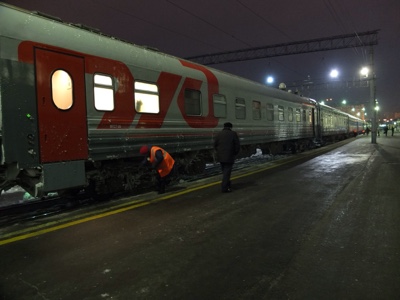 If you look carefully you can see the comms pod and aerial on the top of carriage no 6 under the gantry. I think no 7 is the only “business class” (2 berth) carriage, no 6 is one of a few 4 berth.

The time zone is becoming more disruptive to my routine than I would have expected. My iPad clock demonstrates the issue – train time will eventually be seven hours behind the local time.. 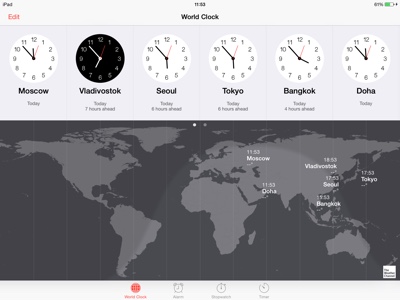 I have devised a cunning solution that makes me feel a bit like a Victorian explorer (which I quite like). It has involved the purchase of a souvenir Russian Railways pocket watch. I have this set to Moscow time and use it in conjunction with the timetable. I then use my wristwatch as the restaurant (local) time zone. I have also started to position the bezel marker of my watch to the time of the next stop to I can plan ahead a few hours. 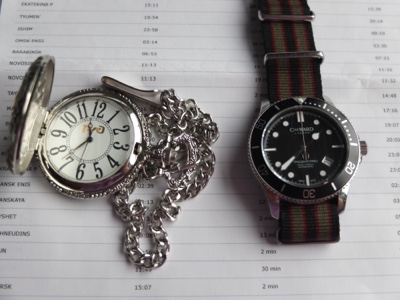 I’m in love with the pocket watch as it feels like a talisman or lucky charm for my journey. Let’s hope it brings me good fortune. 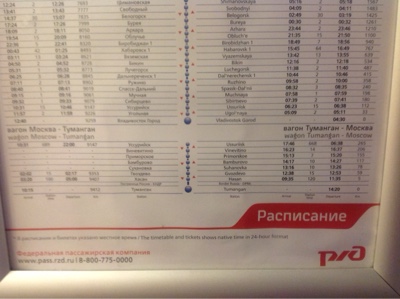 On the subject of the timetable I was reminded today that part of this very train is in theory according to the timetable, on the way to North Korea. Next time I get to the front of the train I shall see if I can spot the carriage in question. I don’t know if it is segregated in any way, but the North Koreans are certainly not visible in the restaurant carriage.

There has been plenty of snow around today, but it’s not properly cold yet. I need to keep an eye of this as condensation could freeze and jam my window shut (or open). At a push I wonder if I might be able to use my espresso machine to squirt boiling water into the mechanism in an emergency.

I have been nothing but bowled over by the work of the Provodnitsa’s on this journey so far. Larissa has completely hoovered the carriage today, including my compartment and the bathrooms remain immaculate. If you are reading this blog and worried about living on the train for a week, then the 002 is for you! I kind of miss the laid back Chinese guards on the 004, but they only ever cleaned the train as we approached Beijing…