My first post from onboard train number 2 – The Rossiya. I just really wanted to share a few thoughts on my new home. My experience of Trans-Sib travel up until now has all been aboard the Chinese train 004. Full of character, but pretty clapped out and with an aroma and atmosphere all of its own. So here I am today on a Russian Trans-Sib train for the first time. It’s quite different!

First in case you are reading this to plan for a trip, let me mention a couple of train things. Generally the lower the number of a Russian train the better it is. The very low numbers are known as special “firmeney” trains. I read recently that within the Russian Railways system they are like a sort of soft franchise, often with better services, and can be much more passenger friendly. So my train runs east as number 002 and west as number 001 – by this rule it is therefore the most important train in Russia, travelling across the length of Russia in just seven days, connecting Moscow to Vladivostok and the Russian Far East. 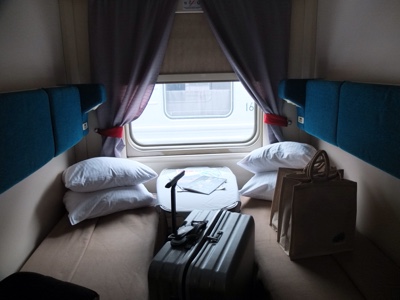 I’m berthed in what seems to be a quite new carriage. It has been recently refurbed and it is quite modern looking without the chinz of some older Russian trains. My compartment has just two proper berths (no bunk beds in this class!). I’m in carriage 7, berths 11/12 for the record. Next to mine is a kupe type carriage, no 6, followed by a more old school restaurant carriage – an easy walk, maybe only 8 doors away. 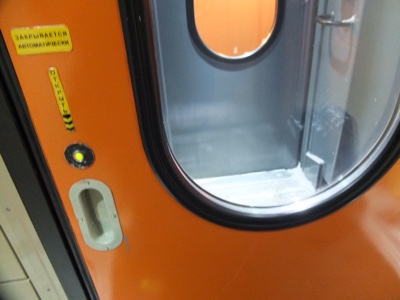 The doors between carriages are fully electric in this part of the train. One press of a slightly scary green button triggers the decompression. A warning tone sounds before the door uncouples with the seals and slides open. Behind it is the vacuum of ice, snow and nothingness but the other carriage door, opened with a second button. It’s the closest that I will ever come to operating an airlock into outer space. They are even painted orange in a homage to “2001: A Space Odyssey”. Or more likely “2010”‘ as there was actually a Russian spaceship in that film, commanded by Helen Mirren. Do you remember it? I think it was called the “Leonov”..

My compartment has a complimentary Russian newspaper, magazines, a cardboard chess set, slippers, towels, and a wash kit. It even has a television so I can keep up to date on my favourite Russian soap operas. It’s incredibly clean compared to the Chinese Trans-Mong train. There is no smell and I doubt even an inquisitive Staff Sargeant wearing white inspection gloves would be able to locate a single speck of dust or grubbiness anywhere. The carriage is run by a lady called Larissa, who is the day shift “Provodnitsa”. I think we will get on just fine!

Things seem much more retail orientated on the Russian train than on the Chinese Trans-Mong. Whilst I have been writing this blog a lady has come past selling ice cream. Larissa has food and toys for sale too. The ice cream lady has also just taken my order for breakfast, one of two free meals I will get on this trip. It’s complicated as I have just discovered that by breakfast we will already be two hours ahead of Moscow time. Working in two time zones – train time and local restaurant carriage time – is hard enough, but translating and ordering meals and calculating when they might arrive is even harder. Let’s see how it goes – I hope breakfast should arrive in a time window of about four hours tomorrow. 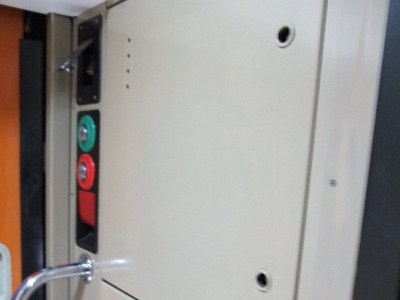 I have discovered another secret of the Russian 002 type carriage. There are three lockable cupboards out between the carriages in the frozen part of the train. This means I can keep my cheese and Pinot Grigio at a low temperature. It seems (officially) to be a coal store to power the samovar. The trick is not leaving your produce in their too long if you want chilled rather than deep frozen.

I have saved the most brilliant news until last. It’s all about the temperature and the Russian love of really hot trains to counter the extreme cold outside. If you have read my blog from previous trips you will know how far I’m prepared to go to get some fresh air. Well the news is the window in my compartment is sealed unit, but with an opening top part. I have the special triangular key needed to open it, but was worried once open it might not close and I would then be in real trouble when it gets colder. Well, it’s not locked! It takes a well practised push to reseal it, but I now have access to my own supply of super chilled Siberian air whenever I want it. I can’t begin to tell you how good this makes me feel. I’m not going to use it until I shut my door for the night, just in case it’s spotted and locked up.. 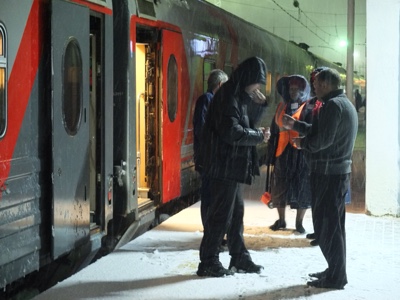 Our first stop today was at a place called Vladimir in the early evening. I hopped off into the wet snow for 20 minutes to watch a locomotive change just as a got to the front of the train (a five minute walk). On the Trans-Mong it feels a bit safer on the platform as you can physically see the progress of the coal refuelling for each carriage. There was none of this in Vladimir as I think this train is more electrically powered for heating.  I’m really worried about getting left behind as I think the doors have an automatic closing system, so I might not be able to open one if I have to dash for a door in a hurry..

My first experience of our restaurant was interesting. It has the feel of a Russian version of “Robin’s Nest”. In between them putting up the Christmas decorations I enjoyed a sort of beef thing (I dare not call it a steak) with a slightly warm Russian beer. I’m promised very cold Russian beer tomorrow. 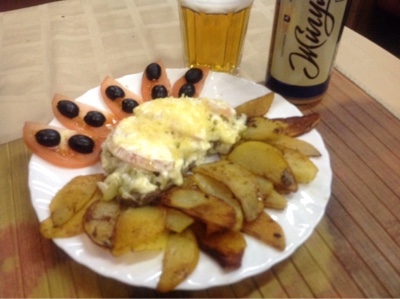 I think that’s all for now. Time to put my Christmas tree up!