There is a kind of long distance trainspotting club that now forms on the platform outside of carriage no 7. We don’t have much in common – other than a shared experience of coping with life on the train. The English speaking members of the club are currently just Taegeun, Alex and myself. We are actively recruiting though. Other potential members of the club are a young Russian girl (always dressed in a tracksuit) who sometimes has dinner in the restaurant, and a middle aged, middle class, Russian couple with who I’m now on “Dobroye Utro” terms – that’s “Good Morning”. My Russian is in fact now coming on in leaps and bounds, as I have also learnt how to ask for hot water and to tell someone that I love them very much.

A short but wintery stop in Novosibirsk, the regional capital city of Siberia. We have had a small regiment of soldiers on the train, but it looks like they have all just got off. Kim (who’s real first name I discover is Taegeun), says the soldiers in his carriage were pretty rude and one from his compartment has been thrown off the train early. I don’t think he means this literally, but sometimes the language barrier gets in the way. Alex had an army officer next door, apparently he was civilised, but not very friendly. Anyway the soldiers have gone home, and their places are quickly filled by new passengers. I think we now have a four ball of German traveller types in this carriage. I only hope that I can stop myself doing some “Fawlty Towers” impressions later on.. 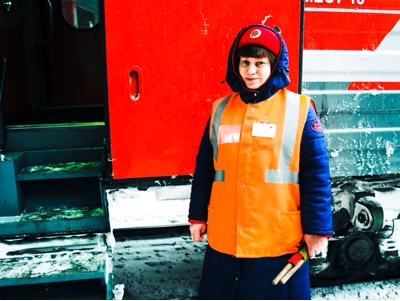 Larissa always dresses like she will be walking on the Moon whenever we get off the train. Other than the axe and a broom to deal with the ice and accumulated snow, she also has a range of flags to signal with and a red plastic torch with an enormous battery pack and sling, which is very 1970’s. She is just great, and I’m very lucky to be in her carriage.