I’m writing some of this blog on the train today, so it’s a crash course in remembering how to use my mobile blogging apps that have been idle since I returned from Singapore in January. I have learned from past trips it’s quite good to run a full test of equipment before setting out; that way there is some “tinker time” whilst you have access to things at home. So today I’m testing things whilst I’m on the train to Cambridge to visit the Scott Polar Research Institute. In passing, I was half expecting to bump into Michael Portillo on the little train that goes from Peterborough, and had I done so I would have enjoyed waving my Bradshaw’s guide in his direction. That will be wasted on you if you have not seen his brilliant television series on great railway journeys.

I was talking to Keith (my official expedition fitness and motivational advisor) last week about how I try to stay in touch on the move. He thought readers might like to know more about the technical side to how I run my blog, something I was I little surprised to consider might be at all interesting.. Given he is right about most things, this post is therefore a guide as to how I write and prepare my blog.

First of all, let me dispel the myth that it might be possible to effectively upload blog posts on the move. Travelling and blogging by train is perhaps more akin communicating from a nuclear submarine – every few days you have to come up to the surface and send messages. In my case it’s about waiting for the next free wi-fi connection.. I have tried using 3G signals from the train as I pass through big cities, but as my blog posts mainly contain images they can take a while to upload. I have found to my cost that he worst situation you can possibly get into with blogging is lost sync between devices and a failed or partial upload – so I have given up trying to do this. I do actually have a tech friend who uses a kitchen colander to boost his 3G signal from his motorhome, but this might create suspicion on a Russian train – I hear every train still has the modern equivalent of a KGB officer on board!

It’s important to me that I write my blog in real time like a diary, so I finish posts and then save them as a local draft each day – then when I next find some reliable wi-fi I can then upload them with the press of a button. As they have been saved as draft files in real time, they get posted in the right order – by the date they were written, not uploaded. I like to write a blog in the morning and then update it as the day unfolds.
This post becomes a bit techie and possibly tedious now, so read no further if you have no interest in how to blog! 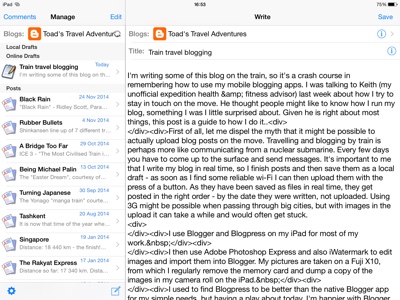 I use two apps for writing my blog on my iPad – Blogger and BlogPress. For my first trip I realised at the last minute the layout limitations of the mobile Blogger app and switched to third party BlogPress just as my ship was setting sail from Newcastle. Then last year the opposite, Blogger functionality was fixed and BlogPress was full of bugs. There is no reason why you can’t travel with more than one editor app as they all sync up with the native blog. Doing some reading today it seems an app called Blogsy is the new kid on the block. I might try that as well. Anyway, they all serve the same basic purpose, which is to allow me to write the blog, edit it and add pictures from my iPad. It’s just a matter of how many bells & whistles you need.. I think the main reason I prefer Blogger at the moment is once you have saved a draft, re-editing is cleaner and avoids and HTML code appearing on the page. With that said, BlogPress allows you to use tags and also schedule dates to publish posts. Neither have a preview facility and formatting can sometimes look a bit odd, so you have to publish, read and re-edit.

Next up is image editing and uploading. You need to get into a procedure for this and stick to it. I remove the memory card from my phone and immediately “lock it” (so I can’t accidentally delete its contents) and plug it into my iPad using a proprietary camera connector. Be careful with camera connectors, as non Apple ones have a habit of working fine at first, then after a couple of weeks not working any more, or only when salmon is on the menu in the Russian restaurant carriage. I always carry a spare now as it is a mission critical device. Once the images are copied onto my camera roll I just reverse the procedure, unlock the card and put it back in the camera. Really annoyingly IOS writes a little file onto the card when you copy it. This used to confuse and slow down my Fuji X10 camera unless I reformatted the card. I impressed myself a few weeks ago and managed to install some new firmware for the camera, and it looks like this is now fixed. 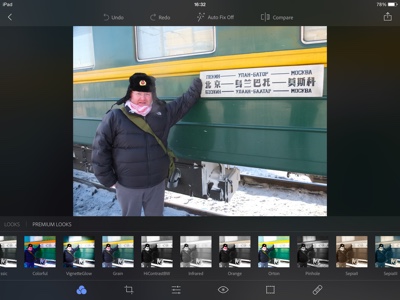 Now the creative bit. Rather than just copying in images from my photo roll, instead I launch Adobe PhotoShop Express on my iPad and there I can do quite a lot of tinkering. Once I’m happy, I save the edited photo back to the camera roll in “Photos”. The final step is to use another app called iWatermark to add a subtle blog signature. I’m glad I tried it all again today as I had to buy a new version of this app to be compatible with IOS8. 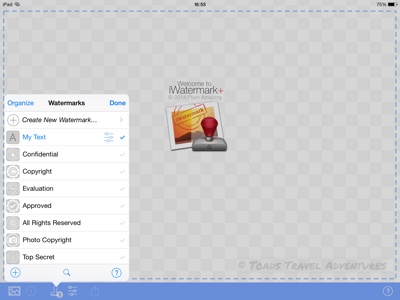 I hope this post has been of some help. In summary, my advice is simply to get into a routine that works for you and test the whole end to end process before you set off. Sounds obvious but this is at the time when you start running about doing all those last minute things. Ideally stay away from home for a couple of days, as this will force you to confront any issues with time to spare!

Oh and finally, just to report that I have posted this blog today by tethering my iPad to my iPhone with a 3G signal here in the U.K. – so it is possible, but don’t rely on it..