After my first good night of rest on a train for this trip I arrived into Moscow at lunchtime today. Much to my disappointment it’s still quite warm here – just below freezing, but no snow lying in the city. It’s due to freeze good and proper on Friday, but it is just damp with a wintery wind today.

I met up with Alexey (my resident interpretor, guide and fixer in Moscow) in the afternoon and we did some cosmonaut stuff. He reminds me that a couple of years ago we went out to a nearby airforce base in December when the day time temperature was well below -20 C. Of course that’s nothing in Siberia, but it was cold for Moscow in December.. 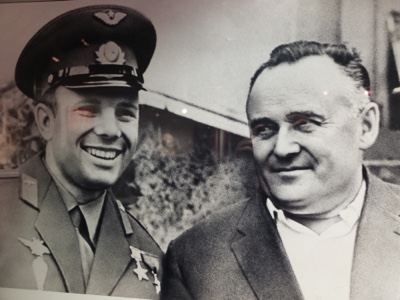 I have spent a bit of time trying to get a better picture of the life and work of Sergie Korolev today. I have been doing some reading recently on the sometimes hidden achievements – and disasters – of the Soviet space programme in the 1950s and 60’s. I’m not going to do the history bit here, but it’s pretty fascinating to get under the skin of. I found a picture of him today taken when he was in the Red Army at Peenemude in 1944 – he had access to V2 rockets but yet still went off in a different design direction altogether from Wernher Von Braun, despite seeing the German missiles close up. I need to reread the bit about his choice of propellant, as my prior recollection was that everyone had left the hydrogen peroxide fuel technology for the British to take away from the German scientist’s work. 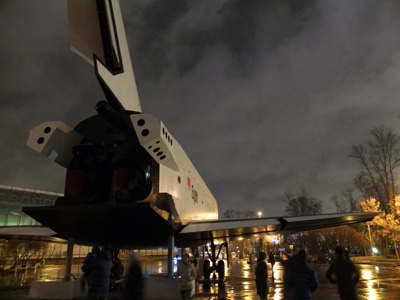 My find of the day was the “Buran” shuttle. It’s a stunning design idea. I wonder where they got inspiration for that from?! One of only two made, it’s now recently abandoned in a park behind the museum at VNDK. One Buran made a single unmanned orbital space flight in 1988 and then managed to land itself. The programme was then scrapped as the money ran out. It doesn’t feel to me to be in the great traditions of Korolev, but I might be missing the point.

There is of course a lot of political and economical baggage in our minds when thinking about Russia at the moment. In my micro world, staying in suburban Sokolniki, people don’t seem to be suffering too much with the burden of inflation yet and everything is much as I remember it. However, I do understand that non interest paying US Dollar bank accounts in Russia are now very popular. 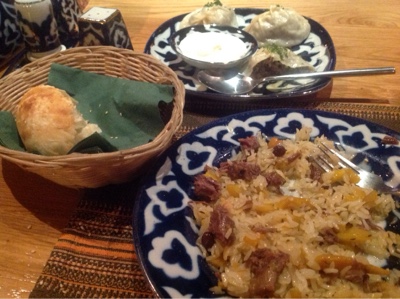 My dinner tonight is Uzbek at a place near my hotel called “Tanyah”. A place where you can eat stunning Central Asian food, drink cold beer, smoke a hooker, and relax to tasteful music in a really nice environment. The food is amazing… and now as cheap as gherkins. The only significant downside is that there is no red wine, just a choice of Argentinian or Turkish white wine (yikes!)..