I managed to haul myself out of bed and complete my ablutions before we arrived into Khilok this morning. Outside it is bright and sunny, but of course a tad chilly. The platform is perilously narrow and heavily loaded train rumbles by inches from your feet. There seems to be a lot less banging of the underside of the train today. My guess is that the problem comes from loose snow forming into compacted ice. There is probably less snow around now, as it is too cold and dry. I have noticed though that the carriage brakes have started to snatch a bit, and this is almost certainly caused by the freezing problem. Even some of the train doors now need “encouragement” with an ice pick. 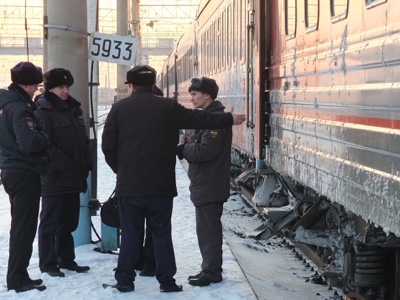 No passengers are getting on or off here, so it’s just me on the tiny platform together with the man who I think is the train manager, the police and the KGB officers. Of course the KGB are not KGB, but having seen “Spies Like Us” on my iPad last night, it’s just my overactive imagination. Or is it? They don’t seem to show much of an interest in me – they must be used to tourists, even though we are now in a closed part of the old Soviet Union. To remind me of this we pass an air force base shortly after, where I count about a dozen MIG 29’s painted in grey and egg blue camouflage parked up outside some bomb proof concrete hangars. They are dwarfed by one of those enormous Soviet Ilyushin transport planes.

(In passing, in case you are wondering, the sign in the photo above is a kilometre marker – there is one every km from Moscow).

On the subject of special forces, the cabin next to mine is now occupied by an officer who wears distinctive blue and grey disruptive pattern combat gear. I have no idea who he is but suspect he does something quite hard. 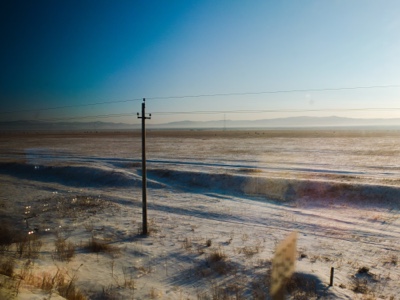 The train has been gradually climbing for several hours, weaving across a river plain since we passed Ulan Ude in the middle of the night. That is the station where the Trans-Mongolian train splits off and heads for Ulan Batar. Our route is now keeping east and skirting the Mongolian and Chinese borders before we finally turn south for Vladivostok. We continue to slowly climb and the climate is getting drier and more desertified. I wasn’t expecting this at all. 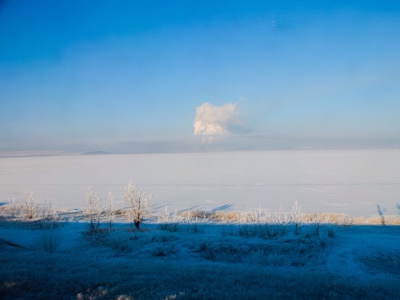 By lunchtime we are in a different climate and altitude altogether. The trees are gone and a frozen haze hangs over enormous ice fields. The locals park their cars on them and fish through holes. Our approach to a city called Chita is signalled well in advance by the plume of steam from the towers of a gargantuan power station. 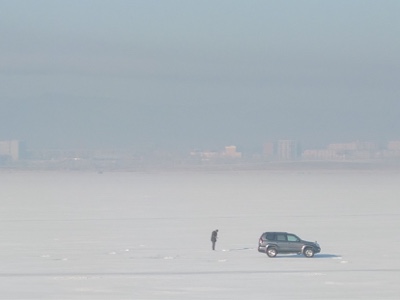 In train news I have noticed that Larissa works her day shift on Moscow time. Thus her welcomed daily hoovering and cleaning will probably be after sunset tonight. This explains why the lady with ice cream comes later every day, as opposed to the restaurant people who now run their operation on GMT +9! 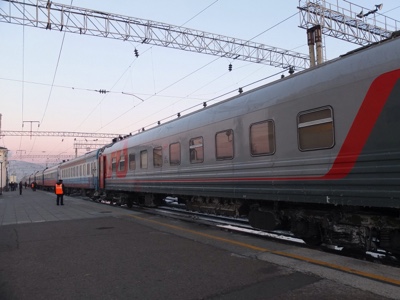 I have worked out the composition of the train carriages in case it is any help to you. Starting from the rear of the train, two carriages of “plaskart” (open dorm style), then a a single first class carriage (my home), then a “kupe” carriage used by the train staff (four berth), then the restaurant car, and in front of this three or four more “kupe” before you reach the locked service wagons, of which there are two before the locomotive. I think that’s ten carriages in all. It strikes me that it must be easiest to get a ticket in “kupe”, and hardest in first class, which has been pretty much full the whole way. I have a suspicion that the kupe carriage next to mine is either empty or for crew use.

I think that’s all for today. I’m off to the restaurant carriage to get the train gossip and to see what’s going on!