Slightly cruelly for my sleep, the longest stop of this journey – some 43 minutes – was at 07.43 this morning at the city of Khabarovsk. This marks the eastern most point of the journey, as we now travel mainly south and two degrees west towards Vladivostok. 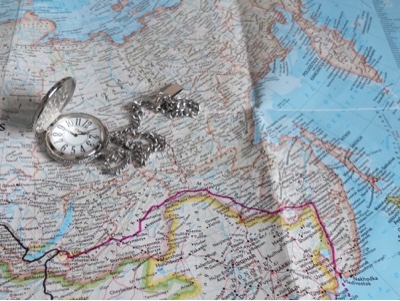 It’s at this moment that I get the map out and realise the progress of my journey. From Moscow to here is 9289 km. I then add the 3962 km from Edinburgh to Moscow, so 13250 km so far. In longitude this is 135 degrees round the world, taking me to GMT +10. That is the same time zone as Sydney, Australia.

I didn’t make it onto the platform for Khabarovsk, so I don’t know why it took twice as long normal to do what needs to be done. I wondered if they might have added extra carriages for the 12 hour journey to Vladivostok, but I don’t think they have. It’s snowing this morning, perhaps a sign that it’s warmer and wetter now that we are close to the Sea of Japan. Taegeun tells me it’s -6 C according to his carriage thermometer. 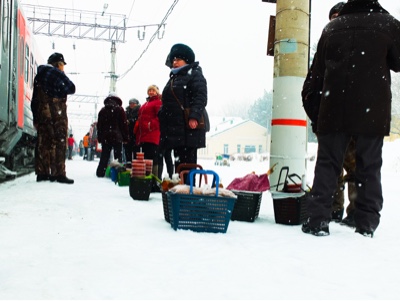 I made it onto the platform at Vyazemskaya later in the morning, where we took on coal for the emergency heating system. The platform was buzzing with traders absent from many of stations in Siberia. The main commodities appear to be fish, caviar, cakes, honey and some sort of hootch sold in big plastic bottles. At first the traders set up shop outside my (first class) carriage, but it only took them a moment to realise their mistake and they headed back to the plaskart carriages where trade was brisk despite the train being only about one third full now.

As I write this blog I am looking across into China. The fence is only 100m from the train at the moment. The railway skirts this border most of the way down to its destination this evening. The fence is about 6 feet high and made of barbed wire with extra barbed wire on top. It doesn’t look that substantial, so either I’m wrong about this being the border, or maybe it’s a zone in front of the border itself. 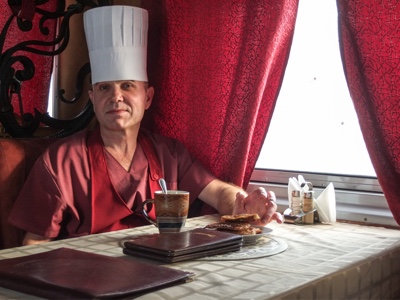 I scored some more caviar and pancakes for my lunch today. I shall miss the atmosphere of the restaurant. I have taken to always saying “hello” to Chef, and he now smiles from time to time. I still don’t know what the woman in the short skirts exactly does, but it must be good for sales. If you saw this place you might choose not to eat here, but I have experienced no problems. Probably best not to actually look in the kitchen itself though!

I have noticed that there are a several policemen onboard the train wandering up and down with batons and handcuffs today. As I have not seen these chaps before, my theory is that the police get on and off the train in each region, like a kind of local patrol. At the stops today there have been groups of police on the platform with dogs too. Maybe extra security is now needed to protect our supply of caviar? 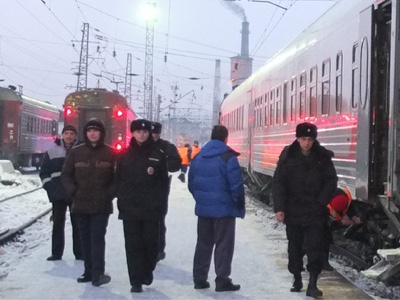 At our final stop before Vladivostok, a place called Ussuriysk, I have a minor panic attack when I discover Larissa has raised the steps and appears to be shutting our door – all the other doors are closed and the locomotive blasts it’s horn. It turns out to be a cruel but accidental trick, as she is just cleaning the snow off the steps. The two remaining Russians laugh at me, and we joke about it.

It’s going to be a strange experience leaving the train tonight. I have effectively been living in a space the size of a double bed (cubed) for over a week now. It’s much smaller than a prison cell, although perhaps better appointed. I seem to have managed to unpack my belongings into every nook and cranny of it in such a way that it feels like my home. Tonight I will decompress into a hotel bedroom with its own bathroom, hot running water, and hopefully some wi-fi. I wish I had longer in Vladivostok, but the ship only sails once a week, and by my calculations it sails tomorrow afternoon.