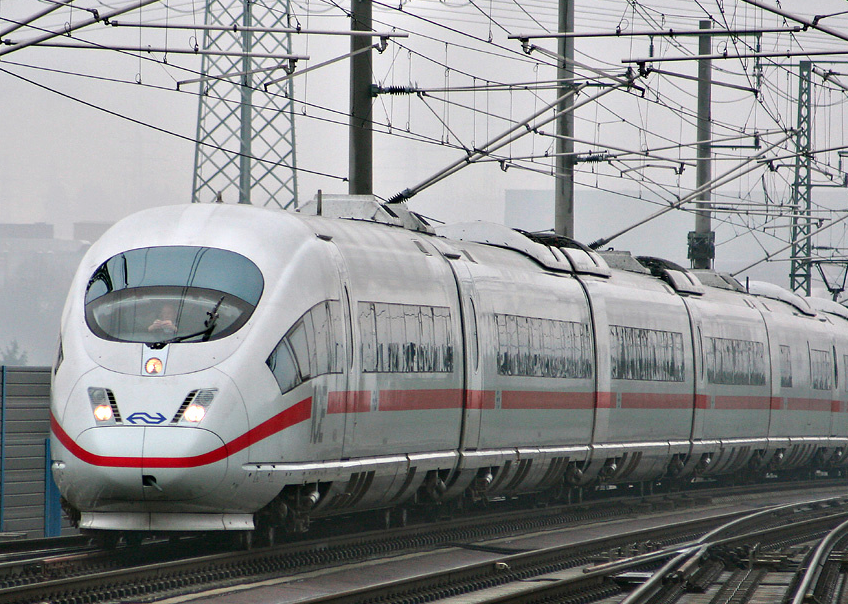 ICE 3 – “The Most Civilised Train in Europe”? Image courtesy Wikipedia.

Well, its official – the winter timetable is now out and Europe now has even fewer night time express trains. From my point of view the main loss is the brilliant “Jan Kiepura” (EN447) from Amsterdam. It seems that Holland is now literally “A Bridge Too Far” from Germany and Poland – so I will have to get a train to Oberhausen where my Warsaw train now originates from. Why Oberhausen I have no idea – its not even as far away as Cologne… It feels a bit like travelling from Euston to Watford Junction on a train before being able to get on the sleeper train to Scotland..

Ah, that reminds me about “junctions” again – I mainly think of them as romantic places (as in Bhowani Junction). I will have to add Watford to my list of probably unromantic junctions. I caught Michael Portillo on the television the other day on one of his British train trips. He interviewed someone on the platform at Watford Junction who was evacuated from there to the countryside during WW2. Apparently of the 3 million children evacuated, a large number started their journey at Watford Junction. Just thought I would sure that junction fact with you!

First Class living on an ICE 3 train (courtesy of VagonWeb)

Oberhausen is actually only 1 hour 50 minutes away from Amsterdam (at 300 kph) so I am looking at this as a chance to enjoy Germany’s latest ICE 3 high speed train before getting on board the “Jan Kiepura” later in the evening. I have had a quick look online to familiarise myself with what Mark at Seat 61 says is “the most civilised train in Europe”. It looks quite comfy in First Class with most mod cons and even a forward facing panorama lounge with funky glass wall. Definitely the place to listen to some Kraftwork whilst speeding down the Rhine valley en route to Oberhausen. If by chance you are a train anorak, can I commend Wikipedia’s page on the ICE 3 (406)

I don’t seem to have too much left to do now after a busy month or so of organising. My passport has been doing the rounds over the last couple of weeks and is due back today. Its much simpler than my last trip as I don’t need to complete any Chinese or Mongolian red tape – just a Russian visa and a Belarus transit visa (Japan and South Korea are also visa free). The trans-sib ticket goes on sale 45 days before departure, so perhaps that is the final hurdle. I have given up trying to get much sense out of the agent in Vladivostok – I’m just going to have to hope things work out regarding the ferry. Communication has proved really challenging and the phrase “hell is the impossibility of reason” frequently comes to mind. I have got as far as getting a letter from the shipping company of the timetable (in Russian!) which is very different again to its website. A booking reference or a ticket seem to not be possible..

Last week I got all my train gear out once again – lots of it! One of the benefits of having a couple of these journeys under my belt is that I now already own nearly all of what I need, as well as quite a lot that I don’t! My objective this time is to carry much less. I seem to have managed to chuck out quite a lot of clothes already (and also the Christmas decorations). My biggest sacrifice so far is to risk not taking my winter boots but swapping them for some trail type running shoes. These seem to have super grippy soles that will both work on icy platforms and will also be useful in the jungle after my rail journey. However I doubt they are very warm or snow proof and might lead to frostbite – something I will have to look out for.. maybe I can buy some heated socks?

Being a Moscow old hand now, I also know where to get provisions for the Trans-Sib, so I can cross Europe with just some basic rations this year (mainly porridge and red wine!). I must remember that my Trans-Sib ticket is “with services” so it includes meals – I’m not used to this as its not the same on the Trans-Mong. Its a great value deal in my mind – a first class “business class” ticket from Moscow to Vladivivstok, 6 days & nights, with meals for £750. I have two tickets as I want my own compartment guaranteed. I wonder if that means I can have two meals as well? Is this a result of the weak Rouble or just that domestic Russian trains are quite cheap?

Think thats all for now. I will report back on the packing and maybe take some pictures of my kit.