Of course there is no single train called “The Reunification Express” in Vietnam – that would be like East Coast calling the 08.30 from Kings Cross “The Flying Scotsman”.. Having said that I have a ticket on the SE1, so I’m going to imagine it is the closest thing to this mythical train, going all the way from Hanoi to Saigon in three days. My destination is Da Nang – 15 hours south of Hanoi in Central Vietnam. 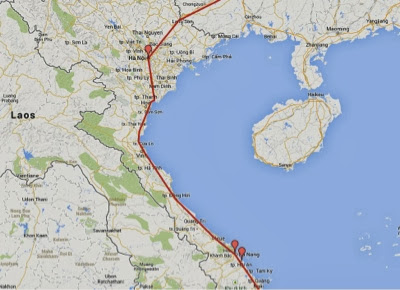 After China, getting on this train was very straightforward – no big queues in the station – and the platform was opened an hour before departure, with just a cursory ticket check. 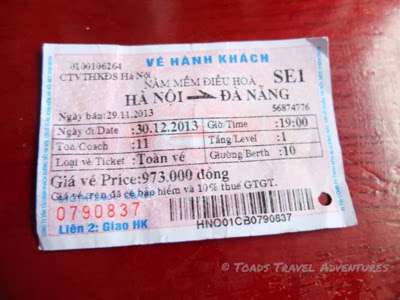 The train is about ten carriages long consisting of soft and hard sleepers, soft seat carriages and a restaurant. I’m in a four berth (second class soft) sharing with Rob, from London, travelling to Hue, and Mr Chi a Vietnamese Canadian, travelling with his sister’s daughter, Ram, on their way home to Can Tho (a place that I have actually been to in the Mekong Delta). Mr Chi left Vietnam in 1979 and went to Hong Kong, then Canada. I’m guessing he was one of the Chinese descended families that left when they were persecuted by the government after the war and became what I knew at that time as “Vietnamese boat people”. 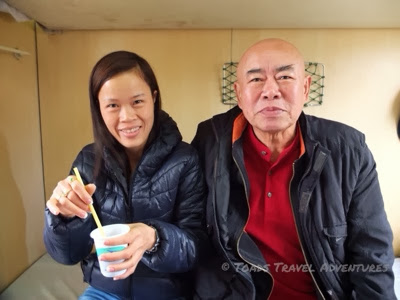 The SE1 is better than my M2 from Dong Dang, in that is the right temperature and has no signs of rodent or insect infestation. It is quite a lively place. Music blares from the corridor and people shout at each other from opposite ends of the carriage. The conductor makes occasional chatty announcements on a PA, but I have no idea what he is saying. The train rocks, bounces and sways with a motion that feels more like a boat in a swell than something actually on rails. It’s pretty grubby, but not so bad as to be a problem. My impression is that Seat Sixty One is slightly too genorous with its descriptions of how “comfortable” trains in Vietnam are.. Douglas Adams might have called them “mostly harmless”..

The staff are quite informal by Chinese standards and perch on collapsible chairs at the end of each carriage drinking tea from proper tea sets and sending text messages to their friends. They don’t seem to have their own compartment. There is also a strange arrangement in our carriage with a woman who lives in a cupboard, but she can’t lie down with the door closed so her feet stick out on a stool and the opening is covered with a purpose made curtain. I have no idea what she does or if this is an official role.. Elsewhere there are flushing toilets and an open plan wash room at one end. The doors between the carriages flap and bang with the swell and provide some ventilation. 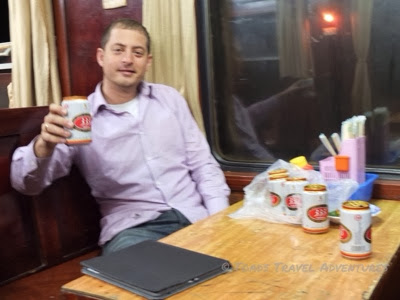 Rob is up for a beer, so we walk forwards nine coaches to the “restaurant” carriage. Not much food on offer, but we find all the off duty staff on the train smoking and drinking. When we arrive its pretty busy and we sit down next to a couple of locals who quickly move on in case they catch something from us. Icy cans of “333 Export” for 15000 Dong (43p). I love ordering this beer, as its one of my few passable Vietnamese phrases – three is “ba” in Vietnamese, so a 333 is simply a “ba ba ba”. A very satisfying piece of school boy linguistics. Rob tells me he is going to travel from Hue down to Hoi An by scooter –  a real “Top Gear” type adventure.

Life in the soft seat carriages looks tough. It’s packed, and quite a few people sit in the aisle on extra plastic stools. People are either watching a Vietnamese version of “Eastenders” on the small roof mounted TV, or covered by their coat trying to sleep. I do my best not to bump into people asleep as we walk through trying to anticipate the rolling motion of the carriage.

I took a sleeping pill and managed to get some rest. On the plus side these trains have no seat backs, so in the bottom bunk you get the full width of the bed, making it more comfortable for big chaps like me. My problem was I needed an extra pillow and I may do something about this for the next leg. The bedding looked clean and as the train was starting in Hanoi there was no issue with it being second hand. The bedding isn’t changed when passengers get off, but is just nicely re folded. I have a sheet sleeping bag and really must start using it.

The samovars are unserviceable throughout the train, which has somewhat thwarted my catering plans, but there is a good supply of decent local coffee from the trolley service. Mr Chi tucks in to the lunch saying its good, but I have my doubts. 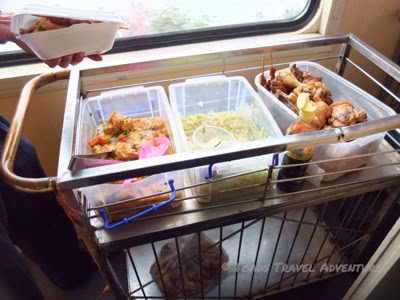 We are running about two hours late. Its a single track in places so we have to wait for the Northbound trains to pass in stations. With luck I should be in Da Nang for lunchtime. We have been through Hue and the Hai Van pass over the mountains that looking back over the beach reminds me of “Charlie’s Point” from “Apocalypse Now””. 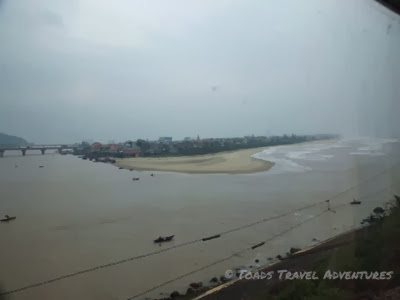 Its New Year’s Eve, so I need to get myself into a more celebratory mood.. I’m also wondering where might be a fair place to break out my shorts. The weather in Central Vietnam is almost warm and cloudy, so this could be it..