Okay, just to bring you up to speed, I have been travelling through Cambodia by bus to connect from the rail head at Saigon to the one on the Thai border at Aranyaprathet. This has meant a day on the bus from Saigon to Phnom Pehn, another day on the bus from Phnom Pehn to Siem Reap, and then a taxi today to the border at Poipet. That is about 600km by roads, that to be fair, are not quite finished in places.

This morning I took a fast taxi (a Lexus no less, “the Japanese Mercedes”) to the Cambodian border town of Poipet – two and a half hours away from Siem Reap. It used to be an eight hour trip until a new road was built a few years ago. I wished we had gone a bit slower, but we got there without any major incidents. There are pot holes on Highway 5 that could swallow a whole car. 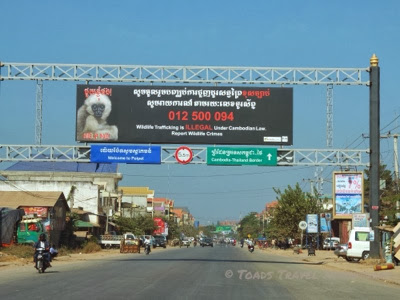 Poipet has a reputation for being one of the worst touting and scamming places on Planet Earth, and I can now see why; but arriving from the  Cambodian side, I’m not high on the target list as there are no visa scams to bait me with (as of course I don’t need a visa to enter Thailand). The other way round and you are open to all sorts of stuff. If you are fan of the original Star Wars films, then Poipet is the real world version of “Mos Eisley” in Episode IV. I can’t remember his exact words, but even Alec Guinness tells Luke Skywalker that its a place filled with scum..

As I get out the car the games immediately begin and I am surrounded by people offering porterage and transportation – eyes down and focus on moving forward. The only problem with this otherwise effective approach is that after a while I realise that I have been so good at ignoring everyone, that I in fact I have managed to actually leave Cambodia without getting my passport stamped and visa de registered. A school boy error, so after comparing notes with a couple of Canadians in “no mans land”, I sheepishly retrace my steps and find a queue at the Cambodian exit for foreigners. I suppose technically I was re-entering and didn’t have a multiple entry visa to do this, but no one stopped me.
Between the two borders is a slightly bizarre strip of land with a casino and a few duty free places. I decided it might be a good place to have a comfort stop – a chance to see Thai men betting like there will be no tomorrow in a place that could have been anywhere in the World but Thailand, where I think gambling is against the law. 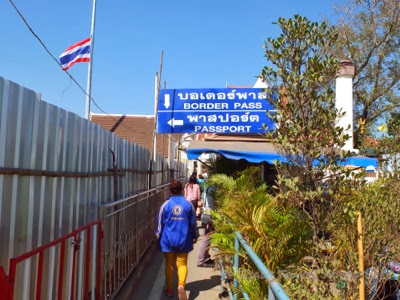 I push my bags up the road and over the bridge (actually in the traffic) for about 200m to the the Thai border. It is more organised here and there is a vague familiarity with forms and procedures, like you do on normal holidays. Out of respect for the King I have put on a proper pair of shoes today (my first non Crocs border in a while) and unsurprisingly there is not too much interest in me or my luggage, and after half an hour waiting, I’m in. 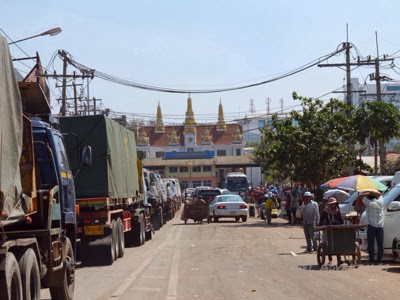 The final step is to get a tuk tuk for the 4km journey to the Thai railway station. Needless to say there are many touts interested in discussing my travel plans. Perhaps a mini van journey to Bangkok or Pattaya? Haven’t I heard that there is no train to Bangkok today?.. Back to my game plan – keep moving forward, and eventually I find a lady selling ice cream and get her intel on where to find a non touted van. Word goes down the street and a couple of minutes later the deal is done – 100 Baht (£2) for me and my luggage to Aranyaprathet. 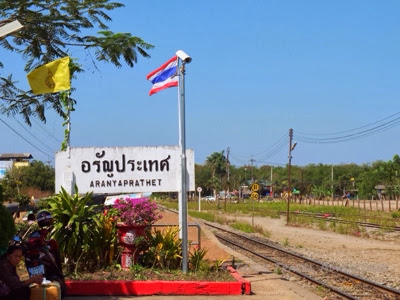 If all goes to plan just a couple of hours to wait for the arrival of the “Cambodian Express”!