Good evening, and welcome to another episode of “border games”. It’s been a relaxing day, drinking tea, dozing, taking pictures of the fantastic landscape around Guilin whilst eating fiery stew from the restaurant carriage. Tonight I am starting with some “pre border, border games” at Nanning station. This is the last big city before the crossing, and most people finish their journey from Beijing here. Except me! 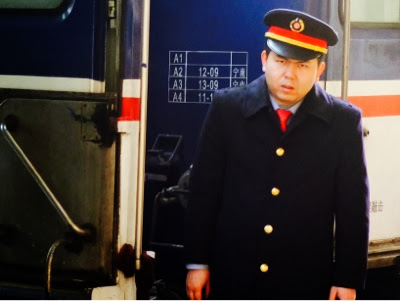 My guard (seen here slightly annoyed with me taking pictures of everything!) got me out of my carriage (but my luggage is left in it) and handed me over to a member of staff on the platform – I am the only passenger on the whole train from Beijing continuing to Hanoi.. I have been escorted to an international waiting room, where I suspect others will join the T5. I feel a bit like a schoolboy taking a plane trip alone – I have a lady who is going to come and collect me and escort me back to the train when the time comes (and I have no idea when that is). The practical reason for all this is apparently a lot of shunting and reconfiguring of the T5 to prepare it for the run to the border. They obviously don’t know that I’m a veteran of cataclysmicly big shunts in the bogie sheds of Terespol and Eirlan!

The lounge in Nanning is full of slightly dodgy looking middle aged men in black leather jackets, smoking and fiddling with their Blackberries. A Chinese version of “Blind Date” blares across the room and a security lady waves a metal detector wand in the general direction of anyone coming in. The girls on “Blind Date” are too easy on the eye, and everybody is mesmerised by what’s on the television screen. 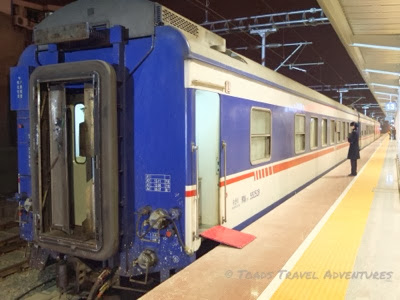 I have been escorted back to the train – now on an otherwise deserted platform 13. I hadn’t realised, but I’m more valuable cargo than I thought – my “minder” from the lounge has physically had to sign me back over to the train guard. They have a black A4 file for me!

I thought that the other people in the lounge were coming with us, but apparently not. It’s now my private train consisting of me, my carriage, a spare carriage, a luggage van plus about ten guards. I asked the conductor about other passengers, but he confirms it as a non stop train just to personally convey me to the Vietnamese side of the Chinese border at Pingxiang. I can’t wait to see how this crossing goes, given size of the likely queue at immigration… 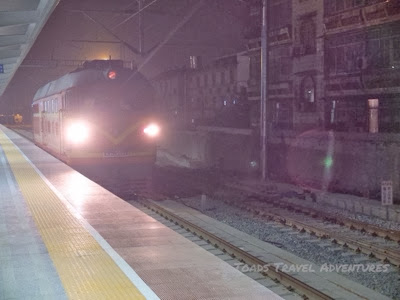 Given the train is much smaller now, I was able to take a gratuitous engine shot. I was mildly rebuked for doing this, but I figured that the whole benefit of a private train is that it goes when you want it to.. I couldn’t take any photographs of it earlier today, as a 20 carriage walk and no timetable made such a visit a bit high risk.

We have just gently pulled out of Nanning – about three hours to run to the Chinese side of the border. I think the guards are settling in for a rest given they have no one other than me to worry about, and what’s the worse thing I’m going to do? (other than possibly try to remove the window!)..

Sitting back in my compartment I’m wondering if this development has any downside. I do hope the Vietnamese authorities don’t single me out for any special treatment…

The driver is tooting his horn every 30 seconds, which isn’t easy to sleep through. However I can’t fault his excitement to get me to the border on time. I guess its possible that it was hooting like this all last night as well, but you don’t hear it at the back of a much longer train. In front of my bathroom there is now a sign that I assume says something like “opening this door is not a good idea” 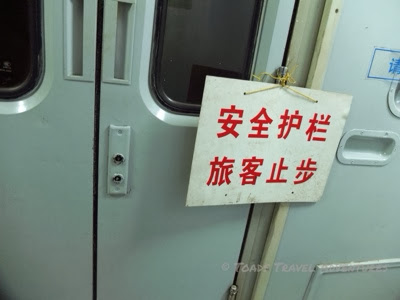 Silence apart from the humming from the idle diesel locomotive as we sit at a Pingxiang station platform. A very polite Chinese official has checked my visas and left with my passport which he tells me he is going to stamp. The crew are mainly in bed, so it’s like the Mary Celeste in here now. No one is telling what to do, so I’m just sitting in my compartment (or should I say “my train”) waiting for new orders.. 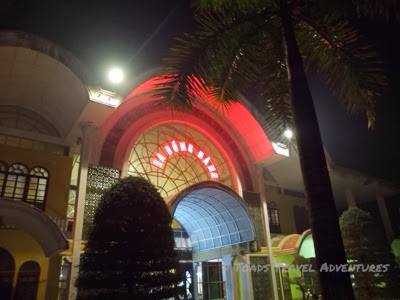 Very unusual. After about half an hour at a very slow speed, and with no lights, the T5 went through a small jungle and emerged on a single track at Dong Dang. An immigration man was hanging round in the darkness waiting for the train, so a delegation of two of the conductors from the T5 (with all their passports) and myself followed him across the tracks into the station. The T5 guys just had a document check and returned to their train, so I said “bye bye” (a well understood English expression in China) whilst I waited for 10 minutes or so in the cold to have my visa stamped and officially enter Vietnam. No declarations, no customs, no health check, in fact no paperwork at all.. The same official then very kindly showed me to two deserted Vietnamese carriages on the opposite platform that will become the continuation of the T5, now in Vietnam known as the “M2”. 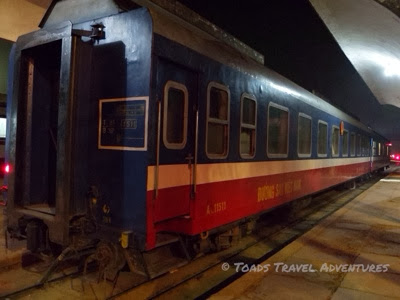 Void of any sign of life he proceeded to help me open up a door to the train, as the guards were asleep inside. A fine fellow indeed. 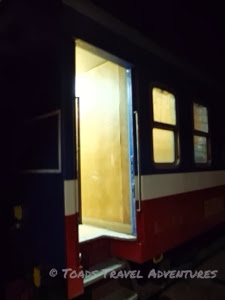 I’m now sat in my simple compartment if the M2, the only human passenger, waiting for an engine to arrive and take us to Hanoi. I do have a stowaway though – a small mouse lives in here too. He’s just gone for a trip down the corridor towards the bathroom. I’m going to remain chilled about this as we only have a few hours together and he is hardly a “Siberian Hamster”. I need a name for him, and of course it has to be “Basil”. I’m hoping we will get along okay. 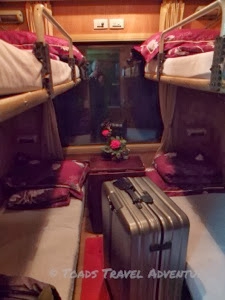 A couple of toots and we are off on the local one metre gauge line – this is the same as the Russian gauge which I used up to the Mongolian border.. Next stop Hanoi at 08.10. The carriage rocks and sways like a boat on what feels like ancient suspension.