I’ve made a point of getting up early for our arrival into Mongolia’s capital city. Its 06.30 Beijing time and still quite dark. I will describe the temperature as “quite cold”, somewhere in the -30s C. The place is buzzing with locals carrying huge numbers of parcels wrapped in brown paper, mixed with western tourists with serious looking rucksacks and insulated climbing boots.

Actually not much to see on the platform, but I’m guessing that any sane Mongolian would conduct their retail activities indoors. I can see coloured disco lights coming from outside the station, and also a door signed as “VIP” round the side. This is clearly the Mongolian equivalent of Kings Cross.

A Mongolian woman has joined us in Carriage 9 – helped aboard by three men to carry all her stuff. Thinking about it, I would expect most Mongolians to use the native first and second class carriages now joined to us further up the train. Maybe she is actually Chinese? I will attempt to find out later.

Our new locomotives have just tooted as they pass by on the next track – a pair of colourful diesels to power us across the Gobi today. I said good morning to “Mr Blond”, who has the comforting habit of repeating what you have just said. Our one directional conversation this morning focused on the English obsession with the weather, and he agrees with me that it is “very cold” outside. Meanwhile “Mr Green” stands in the doorway assessing people as potential first class material. He won’t let anyone up the steps without a close inspection of their tickets first. 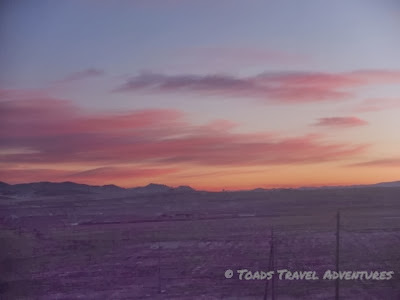 Only three stops today, the final one being the Chinese border in the early evening. Jungle training continues here on board the train as “Mr Green” shovels fresh coal into our fire. He has a standby electric heater that he switches on in the stations – the fire tends to fill the carriage with smoke unless it is moving forwards. As we leave Ulaanbaatar I can see tiny lights in the distance as the train snakes round encampments of walled yurts (I think a “Yurt” is actually the wrong name – sorry, can’t recall the right one). The windows are filthy and this is hampering my ability to take any decent pictures in low light, so apologies for anything that looks a bit ropey. 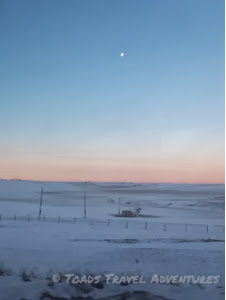 A small science lab experiment going on here in my compartment – my Russian pot porridge is providing me with an indication of barometric pressure – as it has come from Moscow unopened itis now ready to burst – so we must be at a much higher altitude now (or just better weather and higher pressure). I’m going to eat it for my breakfast as I fear I will otherwise become victim to a oat and strawberry infused landmine!

I have asked “Mr Blond” when the samovar will be working and he says “later”. I’m not holding my breath, as this isn’t an indication of urgency in my experience so far.

Yurts are "gers" in those there parts, sir. Fantastic work on the updates – I can but reminisce. (But you're still nuts for going back in the winter). I hope you finally thawed the folk in Little Russia; I seem to remember getting a genuine smile on about Day 4…after a proud demonstration that the waitress could count up to four in English.

Looking forward to the next episode! Be safe and warm.

Thanks Sandy – ger was of course the word that I was looking for!