I’m getting used to the way this train works and I really like it. If you want to catch a slice of China on the move, then just leave the door to your compartment open – not only do the locals come to stare, but you get to see all the people selling things “door to door”. These range from food & beverages, magazines, and sets of nail clippers through to iPads (that have probably not been designed in California). In fact its like a sort of Chinese “shopping channel”!
Having recently read “The Boys from Brazil”, I was also surprised to see no less than seven identical female train guards walk past my compartment together holding hands. Were they sisters or do all Chinese women look the same in uniform?

My first purchase on the train was a can of “American” beer (not sure if Anheuser Busch would be happy with the brand) for just 5Y (50p). I later decided that train dining is one of life’s great experiences, so managed to get some intel on its location – just two carriages further back from my home at the end of the train. 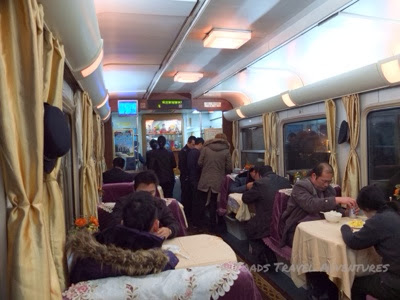 I witnessed one of those comedy moments when everybody stopped eating to watch me and discover the purpose of my visit to the restaurant. The crew started shouting things to each other in Manadarin that I can only guess at there meaning – possibly – “we’ve got another one of those white farang types here – he’s sitting down – who is going to have to deal with him?” 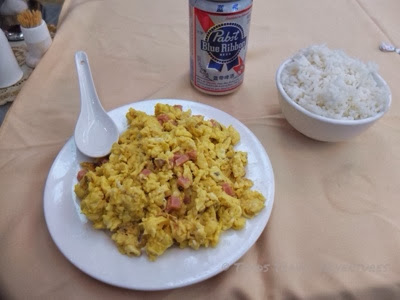 Anyway, all worked out rather well – the menu is in Manadarin, but I managed to get away with advanced international sign language, my “Point It” book and my iPhone Chinese translator. My system now is that I have memorised the menu dishes by their price so I can point to them and act like I can read Mandarin. 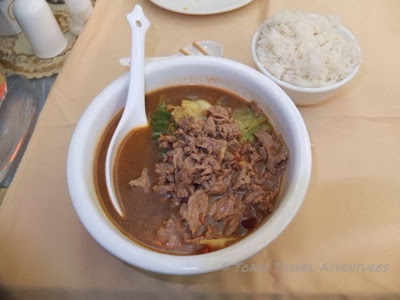 So my supper consisted of what might have been a breakfast dish – scrambled eggs and ham, followed by a rather good spicy beef and cabbage soup, freshly cooked by a team of two chefs.

My only disappointment was the lack of “Great Wall” red wine on board, a Chinese railway personal favourite, so I tried a bottle of the local spirit instead, and wished I hadn’t. 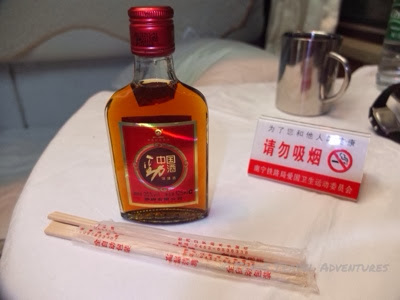 For the record, if you plan to use the restaurant, the correct ettiquete (as I now know) is to choose your dishes from the menu and pay the person dressed like a policeman as you go in, then sit down. I wasn’t sure what was going on when I ordered the beef last night as the policeman came over to breifly interview me – actually with one word – “beef?”. Maybe he gets to decide if the person ordering it is suitable to have such a dish? I think with hindsight they might just be the revenue part of the railway staff, they just look like police. 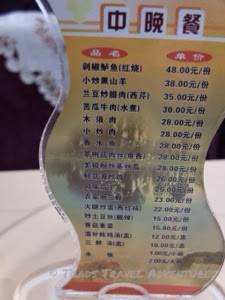 In other train news, we seem to be cracking on – hardly any stops, maybe 2 or 3 in the last 15 hours. It’s not classified as a fast (G) or even a slower (D) train, but still making good progress. It’s also far smoother than the Trans-Mong, with much better potential to sleep. I only wish it went all the way to Hanoi, but its a change tonight. Incidentally, in China no one understands where Hanoi is, but they all know a place called “Hennei”.