I’m on the D10 “Polonez” en route to Moscow via Belarus. It’s my first time on this train, and a decision that I think pays off. More of this later. This morning I stocked up on cheese and wine (there is no restaurant carriage on this route as far as I am aware) and got my luggage down onto the platform without too much drama. Almost a drama though, in that the lift was broken, so I had to use the escalator, something that a health & safety person in the UK would be appalled at. One wrong move and I could take out the whole escalator with my big bag in a sort of Samsonite tombstone ..!

The D10 pulled in on time at platform 2 (to be more precise its called a “peron” here, with two “tors” or tracks) and I hiked down to the sleeper carriges at the rear of the train as it pulled in. I think only four carriages go into Belarus, the rest finishing at the border (Terespol) before we go all Cold War.. The timing of the D10 means I get into Moscow Belorusskaja (GMT +4) at about lunchtime tomorrow, so hopefully no hassle checking in to my hotel. 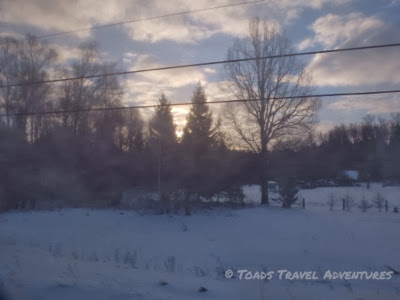 The thing to note about this train (if you are thinking of taking it) is that it is made up of Polish carriages one day and Russian ones the next, and you just don’t know which one you will end up with. Today it is Polish rolling stock and I’m happy about that, as it is a refurbished carriage with a fully functional window, as there is no air conditioning. That’s a game changer for me as Russian carriages are air conditioned and they like the temperature to be set to about 30 degrees on board their trains – far too hot for my liking. I like what they have done here – a decent berth, sink and plenty of storage space. If you are looking for a power socket it’s hidden in the cupboard together with your PKP rations of a complimentary “Scooby Doo” orange juice and a “Prince Polo” wafer biscuit. I have also discovered that unlike a Chinese train you don’t need to be a trained plumber to adjust the central heating either – turning a simple knob covers over the convection holes above the pipe work. 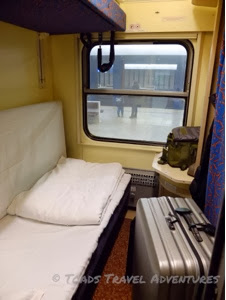 There is a good vibe on the train. The compartment doors are mainly open, the Russian couple next door are playing traditional music, and the Polish stewardess has just boiled the kettle. I have got my trusty Trans-Siberian insulated metal mug out (as the boiling water on some trains melts the plastic ones). I switched today from Moroccan mint to jasmine tea and it’s making feel like I’m much further East than I actually am – although there is at a guess about 10000 km East to go before heading 6000 km South..

Just to keep you on your toes, there are in fact two places called “Minsk” on this train journey. We have just left the Polish one (quite small town with a big supermarket) and don’t arrive at the capital of Belarus until 03.07 tomorrow morning, a time at which I’m planning to be in bed. Looking at my trusty DB Bahn timetable, it looks like the border (and wheel changes) will be between 19.22 and 23.33, but I think one of those times is GMT +1 and the other GMT +3. Anyway there is not a remote chance of sleep till we have had our grilling on the border and got the wheels swapped for the wider Russian tracks – so an evening of visa paperwork, sniffer dogs and much hanging about (literally) in the engine sheds of Brest.

If I’m about I will update later at the crossing.