I left Moscow at 21.35 last night on train 004, the Chinese run Trans-Mongolian that goes once a week to Beijing. Setting off was slightly like a trip to “Hogwarts”, as we helped guide a few others to the mystical, and slightly hidden, platform 3 3/4. Carriage 9 (my home for the week) is in fact full of fellow Western tourists.

I had a pretty rough night, the problem being that the Chinese guards are obviously undergoing jungle training, and have set the temperature in the carriage to well over 30 degrees. In a desperate attempt to seek cool air I got out my tool kit and tried to dissemble anything that might provide some ventilation with the outside world. It is relatively mild outside (maybe only -5 degrees) so this probably isn’t helping. The big prize would be to open the window, which is locked and sealed firmly shut. I managed to free eight bolts and two screws, but it still would not budge. In final desperation I also fitted my “Mark 3” heat shield – 10m of aluminium foil wrapped over the radiator. But it is still too hot in here.

We pulled into Kirov at 09.36 this morning, bang on time. I took the chance to get off and stretch my legs. The crew are still wearing uniforms and caps rather than heavy coats and ushankas, so it must be warm. No one else got off, so I wandered up to the locomotive by myself (keeping a careful eye on the progress of loading and unloading, so I didn’t get left behind). 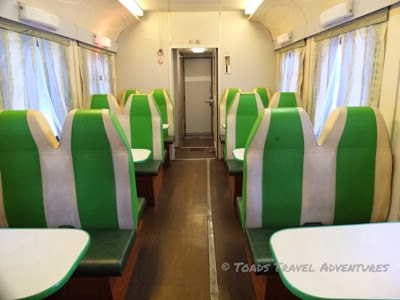 I have found the restaurant car. It is four carriages behind me in front of “little Russia” – the Russian carriages at the back of the train that go as far as the next border. It is weirdly decorated and devoid of atmosphere or activity. I ordered eggs and ham, which had a strange Russian twist with fried onions and tomato sauce. I recognise the chef and her partner from my last trip, but of course they do not remember me. They seem to have bought their dog along for the journey, which provides the only source of entertainment at breakfast. 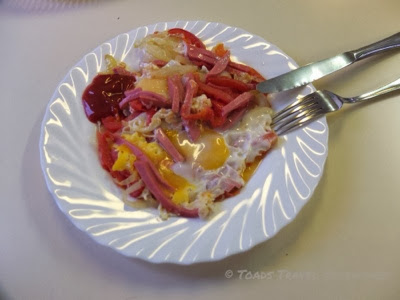 I don’t have my Trans-Siberian book with me (saving weight) so can’t work out how far we have travelled, but it’s about 1000 km per day – so maybe 3000 km in total so far this trip, with 7000 km ahead to Beijing. The train is slow and steady which makes for a comfortable ride, apart from the occasional whiplash effect when it accelerates.. I call this a “Crazy Ivan”..

We arrive into a place called Balezino later on. I will report back on – its a 20 minute stop, so maybe time to build a quick snowman..