This morning I woke at a place called Ishim. Our direction has obviously included a bit of South as well as East over the last 24 hours as it was light at 08.00 Moscow time today. Looking at the map we are in fact very close to the border with Kazakhstan.

My daily routine starts with a trip to “Little Russia”, our restaurant carriage, for ham and eggs. This morning I spotted someone having sausage and scrambled eggs, so I took a photo and showed it to the lady who takes the orders. I was surprised when she then needed to show the same picture on my camera to Chef – surely she must know how to say “scrambled eggs” in Russian – I saw her eating them herself!

We stopped at Omsk bang on schedule at 11.24 for 20 minutes and took on more coal for the fires, as well as swapping drivers (the engine itself is actually electric with overhead power lines as far as Mongolia). I see the locomotive has also been changed since yesterday. In case you are a trainspotter, I can confirm its a ChS2. I only know this as there is a picture of it in my Trans-Siberian handbook. 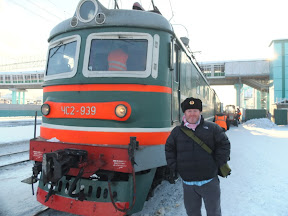 My carriage guard has one polished English phrase which is “ten minutes” – he says this to me each time I get off, so far usually stopping for 20 minutes! I’m not complaining though, as he has my interests at heart and keeps an eye on me on the platform. Last night I heard tales of guards in other carriages who were not at all helpful, so I’m thankful to have him in carriage No. 9. 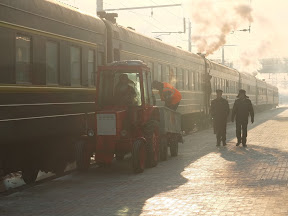 I have also noticed that we have a sort of Chinese “commander in chief” and a second in command, or sergeant major, on the train. Our commander wears a long military style blue coat and officers cap and strolls along the platform supervising the loading of coal and goods when we stop. His number two walks with him everywhere and wears a tank commander’s type of leather jacket and a ushanka hat, with the ear flaps sticking out at a jaunty angle. They make for quite an impressive looking double act (see above)!

By way of update here on board, I have discovered that there are a lot more people on the train than I first thought, but they are in hibernation. There are carriages of Chinese, Mongolians and Russians who keep their doors closed, blinds down and don’t get off the train or even leave their compartment. On the tourist front I can now update my count from four to twelve of us. Notably last night I met four Australians travelling to UB with who I enjoyed a quiet beer with. They are from Perth and gave me some handy tips on visiting wineries along the Margaret River. 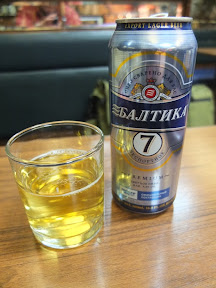 I have discovered that the restaurant carriage not only sells beer but also has a secret stash of vodka priced at 500 Roubles a bottle (£10). There are in fact five types of beer here, all served out of the fridge (which is of course actually warmer than outside!). I favour Baltika No 7 – a light style of beer at 5.4% abv.

My flooding problem was fixed yesterday afternoon – it was the sort of job that a plumber in the U.K. would have charged a couple of days labour for – but we have a mechanic on board who is well versed in Trans-Mongolian plumbing and it looks like a full time job, as I have seen much worse floods in other carriages on this train. 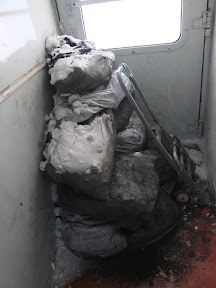 I have an updated procedure for moving between carriages. During the day I just need gloves, but at night a head torch is good to. The Russian carriages have a light in “no mans land”, but the Chinese carriages don’t. Its a scary place to be in the dark, alone, shut out of both carriages in the freezing atmosphere of the outside world, especially if the driver does a “Crazy Ivan”. What I do now is shut the first door behind me but still holding the door handle I put one foot over to the next carriage and grasp the second door handle, ignoring the icy railings. This way I’m not fumbling for it in the dark. One safety tip though – don’t make the mistake I did and wash your hands in the bathroom then attempt this without gloves – your hands simply stick to the door handles. As there is no toilet in the restaurant car and nothing to dry your hands with, it’s a bit of a challenge. 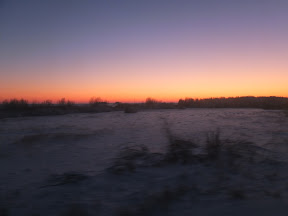 Next stop today is Balabinsk at 15.26, then Novosibirsk at 19.13. These places were closed to Westerners until relatively recently and they still have special visa registration procedures for foreigners. With nearly 6000 km under my belt now, I’m almost at the halfway point to Shanghai!