I finally set off on the Trans-Mongolian this evening after a busy final day in Moscow. One of my biggest nightmares was of course missing the train (it goes just once a week), and for a moment I nearly did. Alexie and I had a quick Georgian dinner (rather special veal and pork dumplings) and as a consequence we then spent and hour and a half in a typically huge traffic jam back to Yaroslavsky station. Anyway, it worked out okay thanks to Victor, our driver, who must have recently watched a Russian subtitled version of “The French Connection” – he knows no fear.. and never removes his leather cap or jacket..

Inside the station it was pretty hard to work out where to go, but thankfully Alexie acted as my interpreter and general “fighter cover”. The only alarming moment was picking up my duffle bag in the station concourse and noticing that about 50 assorted cockroaches had gathered underneath it in just a few minutes. Not very nice!

Anyway, as promised, there was the train (No. 4) on platform 3 ready for a 21.35 departure bound for Peking. At the moment the train is made up of three or four Russian carriages at the tail end, a Russian restaurant car (more to follow on this) and then the rest of the train, which is Chinese run – maybe ten carriages. (Note – I have stopped saying “Beijing” for now, as all Russians still seem to call it “Peking” – its even printed on my ticket, I’ll revert to “Beijing” when I arrive there). 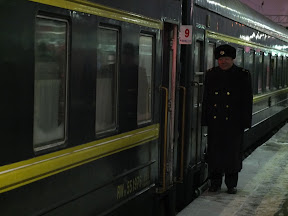 The Chinese train guards are very smartly dressed and all seem very cheerful and happy to help – if of course you speak Chinese and can explain what you need. My compartment was just as I had hoped for, and other than some plumbing problems (I think the drain has frozen) it is a really comfy place to be. The carriage does have an odd smell though. Sort of old furniture, fish, polish and cats all added together.. I hope I’ll get used to it quickly. 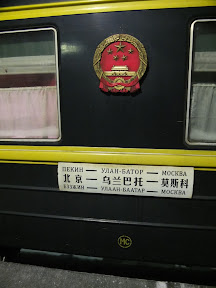 Anyway, I have settled in for the night now. I’m in fact drinking a glass of Merlot listening to the rhythm of the train as we approach Nizhiny Novogrod for a late night stop. There is a layer of ice on both sides of the outer double glazed window, but but temperature is actually fine. To think I was planning to use my secret key to open the window – utterly mad – it would be like opening the hatch in space and I’m sure I would be sucked out into the icy vacuum of the outside wilderness if I were to try it!

No movie tonight, but I have started to read “Firefox Down” by Craig Thomas, which seems highly appropriate after my last day in Moscow. 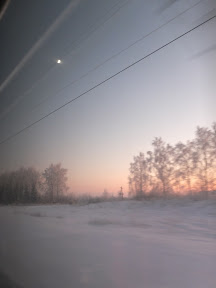 I’m turning in shortly. I have decided to sleep in the top bunk so I don’t have to pack my bed away each morning – the bottom berth will be my living accommodation. It’s a slightly frightening climb in though – there are two steps and a handle at one end, perhaps more like alighting the turret of a main battle tank, rather than getting in to a conventional bed..