Last night turned out to be quite an interesting one. I’ve just woken up (3 hours earlier than I needed to – note to self – I must learn to change time zones before bed). It’s very cold, which is unusual for a Russian train. It turns out the boiler in this carriage is on the blink, so there is a mechanic here with a hammer and some spanners. I think he’s managed to fix it, but can’t help but imagine the consequences if this happened next week in Siberia. In passing the plumbing isn’t that good either and I have rated the bathroom on this train as a 4/10, so best avoided.

Poland went on and on yesterday afternoon, mainly to a soundtrack provided by Kraftwerk – the obligatory “Trans Europe Express” – with the great line “Europe, endless” – it certainly felt like that.

We reached Terespol at about 17.00 and began the transformation into a Russian outfit. First of all a “goodbye” set of checks from Polish border security. Then a short trundle over the border (a bridge, very Cold War) to Brest. A squad of officials came on the train here and searched it, checked our paperwork and repeated this process carriage by carriage several times. After a while the head immigration officer came back with my passport and his body language made out there might be a problem. I couldn’t stop myself from looking at him and saying “All good?”.. He stared at me, tapped my passport in his hand several times, thought for a moment and then gave it back together with stamped immigration card and transit visa for Belarus. My papers were in order!

(A quick note to anyone considering the Belarus route, as I had a minor panic yesterday and could not work it out at first. Although you have a separate visa for Belarus and Russia, the stamped immigration card given to you as you enter Belarus is good for Russia too – there are no more checks in your passport after Brest, so I shall be handing back my Belarus immigration card on the Chinese border, together with the registration of my Russian visa from my hotel in Moscow.) 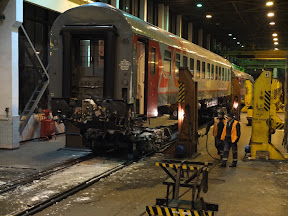 Next up was the train. You might have heard that Russia has a wider gauge of track than Western Europe, so somewhat astonishingly, we were shunted into a shed carriage by carriage, lifted, and had the wheels changed. 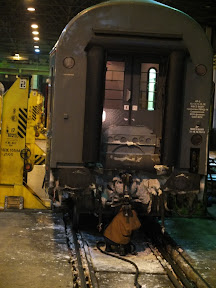 The shed was full of trucks carrying what looked like brand new bogies, so it was an upgrade for my old coach. Whilst this was going on it became apparent that health & safety and security protocols did not apply to the crowds of babushkas selling food and drink here door to door. I picked up a bottle of Belarus beer and also one from Southern Russia for 200 roubles – a real tourist price, but I’m not into haggling mode yet. 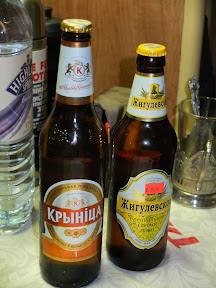 All was going peacefully when a guy from down the carriage popped his head round the door, smiled and asked me if I knew Wayne Rooney. This ended up with us toasting many footballers I have not heard of with a small crowd of Russians, my only translator being a girl who could speak a little English. 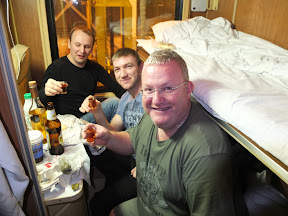 I discovered its quite hard to wrap these sort of parties up, and when I tried to leave at midnight it was explained to me that you can’t go to bed without a fresh round of toasts. 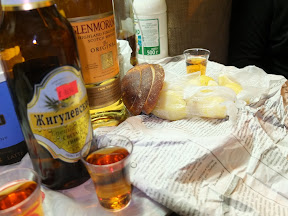 A bottle of brandy later I left them with a toast to “Mir”. I thought it was quite nice to toast a space station, but then found out it is actually the Russian for “friendship”. 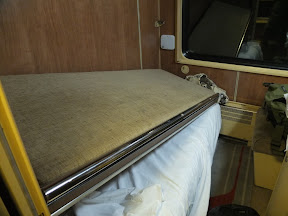 I was left with one small duty which was making up my bed for the night. I have to be honest with you and say this didn’t go too well. Somehow I collapsed the second bunk and got it stuck on top of my own berth. Seeking help from my Moldovan neighbours resulted in a comedy scene of four people and the Provodnitsa (who I now know to be called “Olga”) trying to fix it. The carriage really is falling apart!

Anyway, its 9am now and the sun is slowly rising. Our next and final stop today is Moscow Belorusskaja. Four days sightseeing in Moscow.

And you have the reverse bogie swap – as it were – to look forward to at the Chinese border. Just stay attentive if you're in one of the end cabins, as we were! No more clues ;o)

4 days in Moscow… I arrived in the morning and left again at 21h00 the same day. But I did have 3 days in Beijing.
Brand-new bogies – Great. Brand-new gloves/fingers for the asexual bogie-changers?
Enjoy Moscow. Good draught Guinness at the Tex-Mex restaurant.

Not too much sign of Heath & Safety in the bogie changing shed. I almost got hit by a passing metal pulley from the overhead gantry. I'm not drinking Guinness but am enjoying Baltica No 7!