It’s another night on the border, this time we leave Mongolia and enter China. We have covered 1118 km in the last 24 hours. As I write this I’m sat in my compartment in the silence and semi darkness at Dzamyn Ude waiting for customs and immigration clearance. On the plus side, I’m drinking Russian champagne whilst I wait. More of this later! 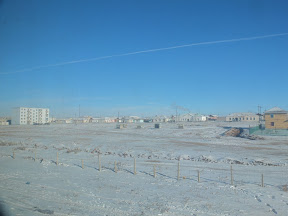 It’s been another great day and I’m sad to be leaving Mongolia so soon. I had planned to get off for a quick look around Ulan Baatar this morning (at 06.30) but instead I slept. In fact I slept through several stops, not rising until our brief stop at Choyr around midday. This surprised even me, as I had been getting up at first light each morning. I think I slept really well – my body must have really needed some extra time to recharge..

I have been reflecting today on the fact that I have gone a bit native in the last couple of days. Those of you who know me will often joke how I usually complain about hotel rooms and how I like everything to be “just so”. Well here I find myself not really caring about such trivial things anymore and just living in the moment of this Trans-Siberian adventure. Some signs of my nativeness (the ones I have noticed!) include:

Back to what’s been going on today – there have been some big changes overnight while I have been sleeping. The carriage that was all my own I now share which about six other passengers, all what I imagine to be “posh” Mongolians. The train has filled up a lot at Ulan Baatar. There have also been quite a few new carriages added and a pair of diesel locomotives up front. Most significantly though, the much heralded arrival of the Mongolian restaurant car has taken place. Just to try and catch me out they have placed it in the middle of the train, only about two carriages (or ten doors) away. I now turn right, rather than left, from my compartment.

So after a breath of chilly air from the Gobi desert at Choyr, I took lunch with Stephan and another new train 004 recruit, Ceyda, a Turkish/American lady who got on the train yesterday at Irkustk. 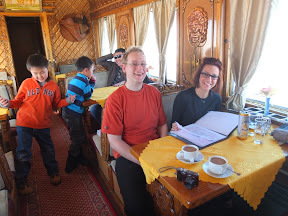 A point in passing. She had been on the Russian Trans-Sib train, the “Rossiya”, and said it was much cleaner and more friendly “down the back” than on this train. Better apparently to travel in Russian third class than in Chinese second class. It’s not a comparison of first class though, where I am very much enjoying this train.

The new restaurant is very different to our Russian one. As you can see from the picture below, the Mongolian railway people have really made an effort to sell tourism in their country. It must be one of the “top ten” train restaurant cars in the world, even just for its originality. It’s heated to about 35 C, and the lady who runs it speaks some English. 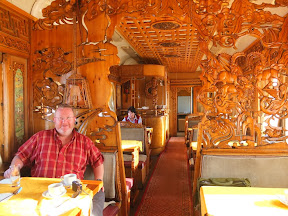 You can pay in virtually any currency (no Rouble coins though) which is just as well as I have no Toureg, the (restricted) local money. I tried the “Travellers Beef” which was fine, but dumpling soup was actually the winner. I was going to have it for dinner but they had sold out of almost everything by the time I arrived. 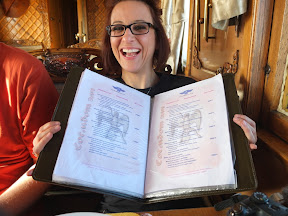 I now have to travel through a couple of carriages of Mongolian First Class on my way to the restaurant. They look plush and are heated to a temperature like you would find in a provincial hotel sauna. They have a slightly weird smell, but then again so does my carriage – and so do I after nearly a week living on this train. The worst thing about them is they have a really tricky “bridge” arrangement as you cross between carriages. This freaked me out a bit at first as its harder than the Russian or Chinese cars and needs an extra step of grabbing a (low) door handle and stepping over “the bridge”.. There is also a large sign on the carriage door prohibiting the letting off of fireworks inside your compartment, so that’s nice and clear and good to know next time I’m thinking of packing some bangers on my future travels in Mongolia.

I bumped into Guard B in carriage 11. He smiled and amazingly, handed me his official key, so he didn’t need to follow me back to carriage 9 (to let me in). It was quite an honour to be trusted with “the” real Chinese Railway key. I would be ashamed if he knew that I don’t need it though, having my own high security British Gas meter cupboard key. 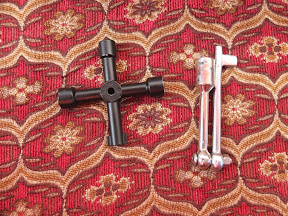 Later this afternoon we stopped at an armpit of a place called Saynshand. We were about 20 minutes late getting in and the train left early. For the first time I had to perform my “emergency alightment drill”, onto a Mongolian car about 100 metres away from my own. I wasn’t going to risk being left in Saynshand at any cost, so I dived up the unmanned steps and returned back inside the train. The stops in Mongolia are faster than in Siberia as we are not taking on any more coal, instead using a stockpile built up as we crossed Russia. 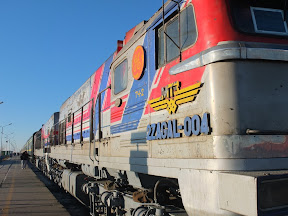 As the sun started to set over the plains of the Gobi desert I was reminded of the episode of “Fawlty Towers” where Mrs Richards complains of the view from her Torquay hotel bedroom window. Basil Fawlty would be in his element here as I can see herds of yak and horses sweeping majestically across the plain as the sun dips behind the distant hills. No hanging gardens of Babylon, but a great view nonetheless. 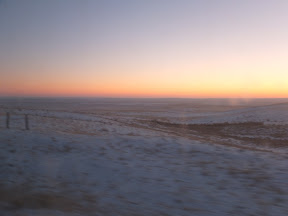 Sadly this leg comes to an end tomorrow at 14.04 local time, when we arrive in Beijing. I will post more on the last bit of this part of the journey, as I know the scenery is good and I also have a farewell brunch with some of the travellers in our soon to be added Chinese restaurant car, which rumour has it, is rather good.

I should mention before I forget that we are going to change the wheels on the train tonight. For me this is the second time, having done this in Belarus coming in to Russia what seems like ages ago. China has the same train gauge as Western Europe, so its a repeat of lifting every carriage separately and popping some new wheels on. 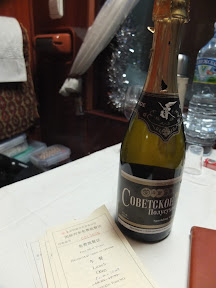 Now back to my Russian “champagne” which I found out about in the restaurant car, price USD 16. I could not get this in our previous restaurant, so it was a pleasant surprise. I have a rather neat trick which is putting the bottle in a box (also containing a couple of beers) and then wedging my “mini bar” in “no mans land”, between us and the next carriage. With the outside temperature the way it is it takes only moments to come down to 3 C. The only problem is with all these border checks I have to be careful when to grab it back. I bumped into the Mongolian customs man carrying it out my compartment earlier and I think he thought that I was a probable alcohol smuggler! Guard A looked very worried for a few moments, but he laughed it off.

I can feel that ache for Mongolia -and especially the Gobi- from here! I dreamed about following a single file of horses/yaks/camels… or even a solitary animal… across that fabulous pulsing desert. Wonder if you had the Korean beer… Enjoy Beijing. I can send you directions if you'd like to try the Chinese Moslem kebabs…!