I visited North Shields yesterday afternoon to board “Princess Seaways”, the daily DFDS ferry to Imjuden. The only attractions in North Shields appear to the visitor to be the ferry port and a Mega Bowl, so don’t ever make a special trip out here!

Once aboard (another mammoth workout session with the baggage, this time with extra climbing) I did a deal with the Purser and upgraded to Commodore Class for what seemed like a pretty reasonable E 50. For this I got a cabin 8012 (more like a suite), a complimentary mini bar, a flat screen satellite TV and breakfast in bed. The best bit was actually the bed itself, which was the most comfortable I have ever encountered on a ship, and I include the QE2 in this comparison. 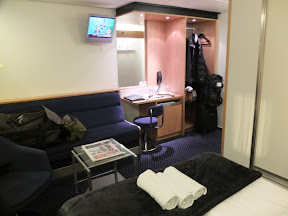 I took dinner in the steakhouse which whilst pricey, turned out to be excellent. The advantage of it being pricey was the the cast of “Geordie Shore” (who I was sharing the crossing with) would probably rather spend that sort of money on another couple of bottles of vodka. I avoided the disco and retired to my cabin later in the evening. I know what you are thinking – sad old man! 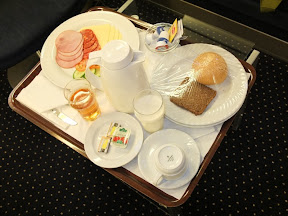 Sleep was blissful until the party goers left the bar, which went on from about 2am to 5am. I was quite shocked to see them all still drinking vodka out the bottle on the bus to Amsterdam at 10am. Frankly, between you and me, I was pleased to leave them to get on with whatever they planned to do with their 4 hours in Amsterdam before returning to the ship to do it all over again..

I’d definitely use the DFDS crossing for getting to Amsterdam, but next time I would ask for a cabin further away from the bar (the premium cabins are all on deck 8, which is the highest deck, shared with the casino, lounge and cinema).

I’m now chilling out in Amsterdam until my train to Warsaw later on. I’ll keep you posted on my progress towards Moscow when I have some wifi. Time for some proper train travel now – 2596km to Moscow..

We're both so 'trains', but your little jaunt across to Amsterdam has me itching to get back on a cargo boat and set off for the Cape. I'm obviously going to have to fight off all types of nostalgia with every one of your Posts!