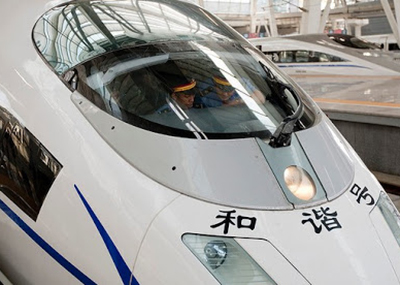 Preparing for blast off in Beijing (photo from Sydney Morning Herald)

I loved the train information on the Beijing Travel website “Attendants on Beijing-Shanghai high speed train are aged 19 to 22 years with height above 165cm. All of these pretty girls have high education background with ability to speak both Chinese and English.” This sounds like my sort of train!

The G (high speed) train looks quite different to the Trans-Siberian. Its going to cover the 1318 kilometres from Beijing South to Shanghai Hongqiao in 4 hours 48 minutes, travelling of speeds of up to 350 kmh. After a week on the Trans-Siberian, thats going to give me a nose bleed..

I don’t yet have a ticket to travel from Beijing to Shanghai. To get a ticket issued on a Chinese train you need to have a copy of your passport in the issuing ticket office, so its not so easy now under some recently introduced rules.

I exchanged emails with Chinatripadvisor (one of two or three agents offering to get tickets for you mentioned on Seat Sixty-One) and found it to be not just hard work, but easy money for them, as the prices they quote are obviously marked up. The agent price is £192 compared to the station price of £137. To be fair though its a service, and they deliver your tickets to your hotel in Beijing.

Fortunately I don’t have to worry to much about this, as I think I have just enough time to get the ticket myself when I arrive. This means that I will be taking the hallowed pilgrimage to the English speaking window at the “ticketing office for foreigners” in Beijing Main Station. Wish me luck!

The Seat Sixty-One website has loads of great information on Chinese trains, but some of it on this particular journey contradicted what Chinatripadvisor were saying in their email to me – that “there is no VIP class any more”. I think I have now solved the mystery, as I found this great article from a web site called Beijing Travel with a better description of the types of class and ticket. The agent won’t sell VIP class, but only Business Class (and Deluxe Class) – actually they can be the same thing, with different train configurations, so I think the problem is solved. By the way, “first class” is lesser to “business class” on G trains, in case you are confused, and this is a “high speed train” which is superior to their slower “bullet train”.

I have updated this post as have also found a great article in the online Sydney Morning Herald. I’m confused again as they describe “VIP class” as a couple of seats at the front. Anyway, I’m happy with business class on this occasion.