I wish the title of this post referred to the amazing speed and effortless agility of the German ICE train. I really do, but it doesn’t. Instead it refers to that fun 1976 train caper film with Richard Pryor and Gene Wilder. Have you seen it? Specifically the bit about being chucked off your train and then trying to catch it up and overtake it. More of this later. 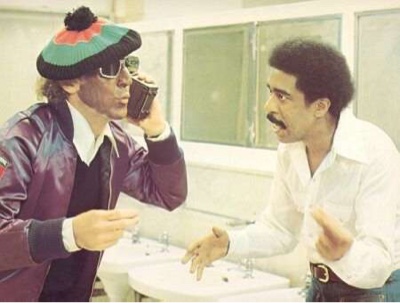 I’m actually really pleased to have been hit by a minor train based crisis today. I needed something to rebase my reactions to a relatively minor travel problem in the grand plan. The experience has instantly given me back my train mojo. I’m not a religious person, but it has also given me a great lesson in having faith, both in myself and in those around me.

My journey started off auspiciously enough in Amsterdam, when my ICE 227 train whirred out of the station and whizzed down the line in the direction of Frankfurt (carriage 29, seat 71 for the record). My first destination was due to be Oberhausen, the new start point for the cut back EN447 “Jan Kiepura” service to Warsaw. 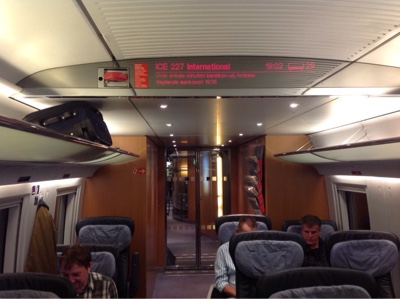 So I settled in and relaxed, knowing I had a 76 minute layover between the two trains. About 90 minutes into the two hour trip all the connecting passengers were summoned to the Bordbistro (bar car), towards the middle of the train. The guards have a neat little office there. It turns out the overhead electrification had totally failed at Emmerich (close to the German border) and we were going to be stranded. What was the plan..? “Go back to your seat, we are working on it” was the loose translation, so I did as I was told. About half an hour later I was summoned again (and this time told to bring my luggage) along with all the passengers connecting east to Berlin, Prague, Vienna and Warsaw. Organised chaos, with lots of luggage. 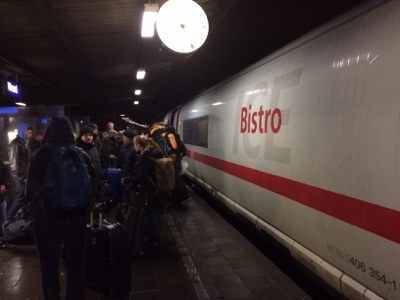 Clearly no one was too impressed by the situation, but no one was complaining either. What you could see in the bar were four DB Bahn employees working on a cunning plan – several in fact.. The first wasn’t actually that cunning – get the connecting passengers separated from the others and sneak them quickly off on a bus to our destination, maybe half an hour away, where we could possibly still make our original connections. Cutting a long story short, the bus didn’t turn up fast enough and we were not going to make it. 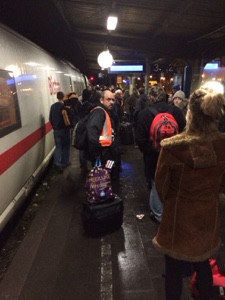 Much discussion in three languages on the wet and windy platform (now at Wessel) and plan C was hastily devised – take a bus from Wessel to Dortmund where we might be able to catch the now missed connection to Warsaw and Prague. At this point I didn’t have a map, but I remember the rather circuitous route of the train that went from Arnhem to Cologne and then back towards Dortmund in a “v” shaped journey south then doubling back to the north east. I didn’t hold out much hope, but had little option than to go with the flow. Once we were all on the bus, I booted up my Google map and lo and behold, it did seem possible with some luck. My train that had left Oberhausen at 21.30 didn’t leave Dortmund until 23.56. It felt a bit like a “Top Gear Challenge” – Matthew in the bus, Jurgen in the train, who will get to Dortmund Hbf first?

I was ready for a bit of a panic stricken arrival at Dortmund, but in the end we actually arrived there with more than 20 minutes in hand – so I got to make my first ever “Silver Streak” connection – it’s the one where you miss your train but catch it up by other means, and manage to get back on it. It’s worth 1000 points in your I-Spy book of international rail travel..!

A brief reflection on the experience. Firstly there was my poor reaction to a problem that I couldn’t control. I have given myself a good talking too, as there is just absolutely no point in thinking negatively – I should take solace that I didn’t get at all angry about it though. Secondly the black comedy. There was a moment when I realised a functional toilet might be hours away and had to get back on the train with my luggage out on the platform. At which point whilst doing my business, I thought the train was about to leave the station. This resulted in an emergency evacuation before the doors were closed! Thirdly the camaraderie of my fellow passengers, who were all brilliant at translating for each other and helping each other with luggage. Fourthly, the leadership and professionalism of the DB guards who donned fluorescent bibs, got their phones out, fixed our problem and took us like refugees to Dortmund. I’m not sure that would ever happen in the UK.

Let’s hope this will be the only glitch in this year’s mission!