I’m a bit annoyed with myself this morning. My plan was to rise early in time for our 22 minute stop in Ilanskaya. Today is devoid of any long daylight stops so I thought it would be a good start to the day. But at 03.13 Moscow time (but 07.13 local) it was still dark and I lacked the self motivation to leave my comfy berth. This is a very subtle form of torture as you have to continually refer to two time zones growing further apart – it’s not like going on a foreign holiday and just changing your watch. 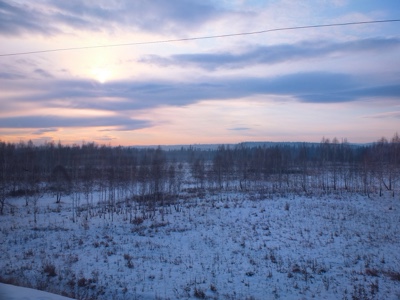 It’s been quite a nice day, and I can see mountains to the due south of us (a quick look at my trusty National Geographic map) – it looks like the Sayan range that separate Russia from the western edge of Mongolia. 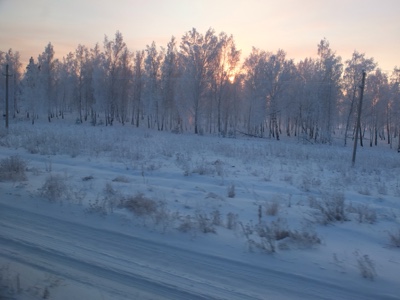 The landscape is endless and we speed past each new forest and valley to the sounds of some Ry Cooder from inside my compartment. The trees look amazing with frozen ice on their branches and the low winter sun shining through. 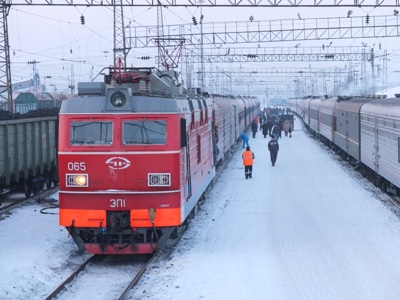 Our stop at Zima is at close to sunset (11.49 AM Moscow time!) and lasts for 30 minutes. Being a part time train anorak I wanted to get a photo of the engine, but the problem is that they detach it faster than I can get up there sometimes. So for this stop I set off early and went up inside the train as far forward as I could. In front of carriage no 2 is locked, so I can only assume carriage no 1 must contain either a nuclear missile or North Korean passengers. 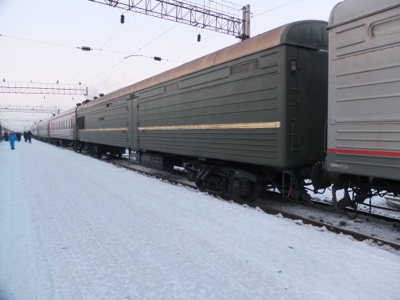 On the platform for 30 minutes and it’s getting colder. Maybe -15 C and likely to be dropping fast as the sun goes down. There is not much retail therapy to be had here unless you fancy some black market cigarettes. It’s a busy station and whilst we were waiting a freight train thunders by on the same platform that must have been getting on for a kilometre long. 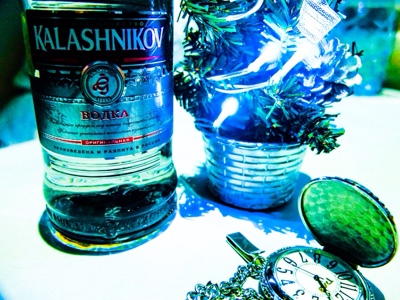 I’m not really a vodka drinker, but this is the Trans-Sib. So I purchased an official RVD (Russian Railways) bottle supplied with a special brown paper bag. It cost me 750 Rubles for a half litre which is very pricey by Russian standards. I thought that there might be an under the counter supply, but apparently not. The brand is Kalashnikov! As someone who has played a lot of marketing games, I love brand extensions. I was trying to think of a comparable one. The best that I could come up with was English Electric. In the 1950’s they manufactured both the housewife’s favourite washing machine as well as the brilliant nuclear capable and supersonic “Lightning” interceptor fighter. 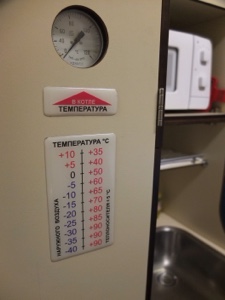 I have stowed my Kalashnikov together with my Pinot Grigio in the unheated secret locker at the end of the carriage. Whenever I ask now Larissa just gives me her key. This reminds me to check on the wine after the next stop in case it’s now too cold out there. Of course the vodka won’t freeze, but I guess the wine could.. There is an outside thermometer in the Provodnitsa’s day cabin and I don’t like the way it focuses on the negative part of the temperature spectrum!