I have checked in at the Eastern & Oriental Hotel. Founded by the Sarkies Brothers in 1885, and once described as “the finest hotel East of Suez”, it is a past home to many famous people, including two of my heroes, Kipling and Conrad. Don’t forget of course that “Apocalypse Now” was based on Conrad’s novel “Heart of Darkness”..! 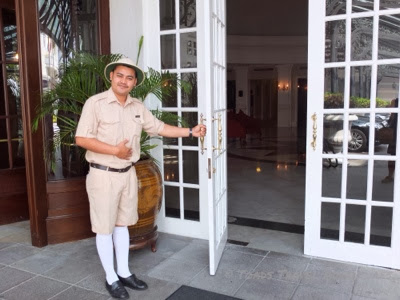 It’s all very old school, and I’m sure if I spent very long here I would begin to think Great Britain still had an Empire. If you are travelling on my route and you have a big bag (or better still a trunk), this is the place you need to get out your Panama hat and linen jacket..or better still, a pith helmet! The hotel even provides a batman, who is charming and wears a black bow tie.

I don’t have too long to linger here though, as Ian from The Tropical Expat blog is taking me out to show me round – and interview me – he tells me as we drink a cheap but cold beer at a nearby roadside den.

Dinner is hawker centre style, where we both end choosing Syrian food (that tasted great) washed down with icy Tiger. Beer here is quite a bit more expensive than the last couple of countries I have been in, and I’m adjusting to this – a big Tiger here costs at least RM16 (£3). 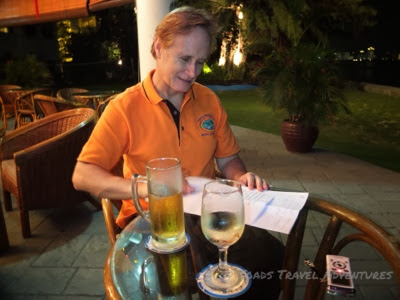 Ian invites me back to The Penang Club for a drink where we discuss rail travel. The Penang Club was established in 1868 as an expat enclave in a very Victorian sort of a way. It retains this feel today, albeit now amidst a very different Penang. Like me, Ian is into the adventure of big rail journeys, so a good chance to compare notes. If you would like to read the interview, here is a link

When I get back to the E&O I contemplate going to “Farquhar’s Bar” for a nightcap, but decide against it as I might not be able to stop myself saying things like “Stop throwing those bloody spears at me!”..