It looks like we are running half an hour late – we have just pulled into Ishim at 08.28 Moscow time for a quick pit stop – 12 minutes here according to the schedule, so I’m not getting off. The brakes on our carriage seem to be playing up – when the driver slows the train our carriage tries to do a full emergency stop. I’m guessing we have iced up underneath, so hoping they can fix it later this morning, as its bad enough to throw you out of bed..

It’s getting colder outside now (and more bearable inside too – jungle training special ops must be on hold). I don’t have a thermometer, but the drain to my sink was iced up this morning. The locals on the platforms are in full winter gear now.

Russian station platforms can be strange places. I got off the train at Balezino yesterday afternoon for a spot of light shopping. There are mobile stalls here selling everything from stuffed furry animals to local handicrafts, as well as the vital stuff like “Pot Potatoes” and beer. There is obviously nothing more normal for the average Russian than jumping off the train to pick up a pair of slippers and a Muppet for their significant other. 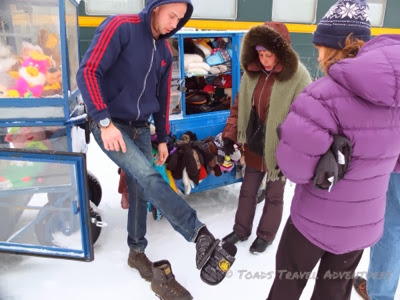 I had a slightly alarming moment here when I realised I was almost standing in the path of an oncoming train. There are no raised platforms in provincial Russian stations and the tracks are mainly covered in snow. The driver tooted his horn and had an expression that I read as “Bloody tourists”! Oops.. 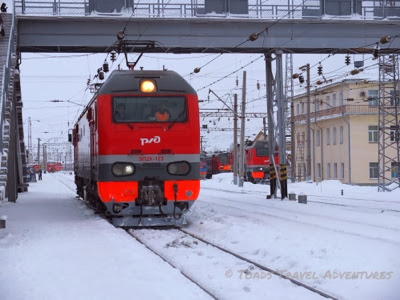 Last night I had a slap up supper in Little Russia – fresh salmon followed by a pork escalope and washed down with some Baltika No 7. Not cheap though – about 1500 Roubles or £30 (perhaps there was quite a lot of beer).. The restaurant was full of us tourists from carriage No 9 (first class) and carriage No 6 (second class). No locals to be seen. 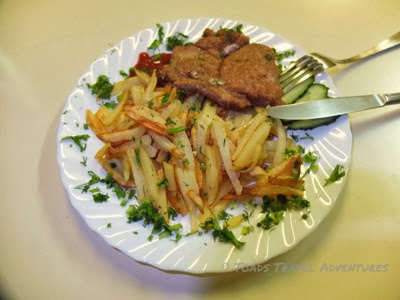 Late in the evening we stopped at Yekaterinburg. Not having my Trans-Sib guidebook with me this trip, I can’t tell you anything about the place. However, if you judge the city by the station, it’s probably an okay place. 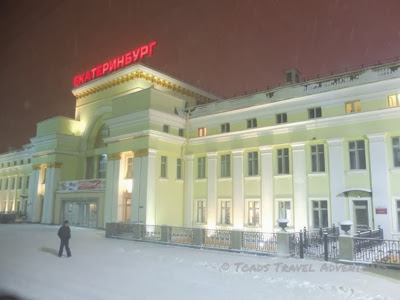 I’m going to get some coffee on the go and try a Russian pot of porridge whilst I listen to some Steely Dan.