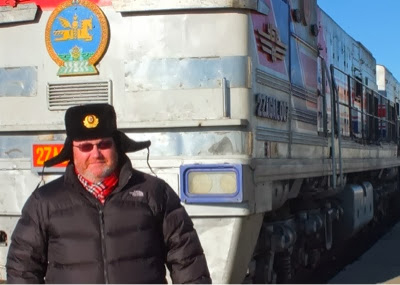 An epic day crossing the Gobi desert to the soundtrack of “Wish You Were Here” (Discovery edition).

When we stopped at Choyr I dashed up front (it’s still a long way) to do my trainspotter bit. There was some funky young Mongolian guy doing the same – dressed in a blue flying suit, brown leather flying boots, a peaked Mao hat, some Oakley shades and carrying a silver topped stick (see the picture below). He smiled and then proceeded to climb up the ladder onto the engine – he was the driver! I have to say he looks very happy in his work, but slightly too much like a Kamikaze pilot for my comfort. 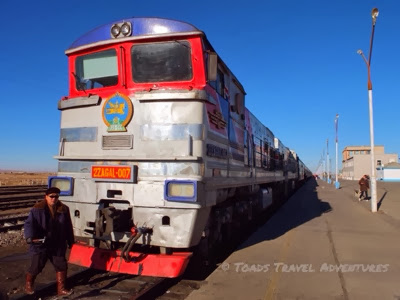 Its cold here but so dry and sunny that it feels quite nice outside as long as you are well wrapped up. Not much time to explore, and I completely missed the statue to the first Mongolian astronaut behind the ticket hall. “Mr Blond” kept an eye on me as the driver did the equivalent of a pre flight check of the locomotives (there are two pulling together) – I’m assuming Mr Blond gets marked down in his appraisal if he leaves any passengers behind! Anyway, he’s a lovely chap – really kind to us foreigners. 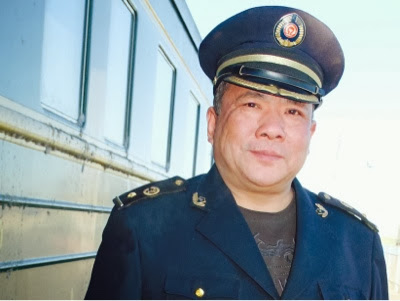 I took a Mongolian breakfast with Paul (from Teeside) who has rum news from Carriage 6. Last night the military police took Robert, his Mongolian cabin mate, off the train at the border. Situation now unknown. Whilst I was sipping a glass of Merlot being saluted at, Paul was imagining himself starring in an episode of the next series of “Banged Up Abroad”. The story is that Robert had been butchering his home cooked meals on board with quite a big bayonet or Rambo type knife which he didn’t declare in his paperwork. When the border security found it in a search they brought in the military (serious guys with guns and an attack dog) to remove him. I’m shocked by this, and needless to say Paul was pretty worried in case he became implicated. I don’t want to make light of this unfortunate situation, but Paul did mention that he had Robert’s Facebook details. Let’s hope they give people access to Facebook in the Mongolian penal system, as this guy is now MIA. 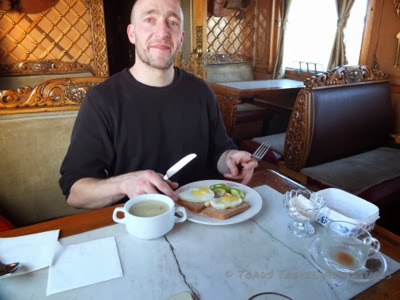 On a much lighter note, I have scored a bottle of Russian “Champanska” from the Mongolian restaurant – like last year, I shall drink it as we change wheels tonight and enter China. At 48 Yuan a bottle it’s something of a bargain – less than £5! 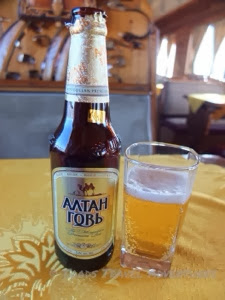 I’m sat in the restaurant right now enjoying an icy “Golden Gobi” whilst they cook my dumpling soup – a dish I have been looking forward to since I started booking this trip. Its Sunday today, so this is my equivalent of a roast lunch. 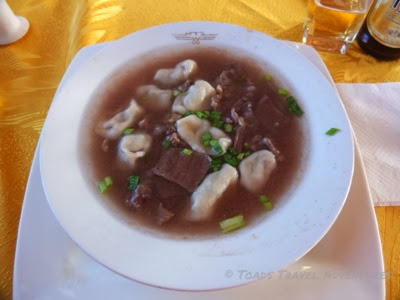 Its picture postcard stuff outside now – the sun is high in the cloudless sky, the windows are iced up on the outside as we pass endless telegraph poles and the occasional farmer on a motorbike chasing his camels. This is the view that Basil Fawlty tells Mrs Richards about – with “herds of wilderbeast sweeping majestically across the plain”..

Not much more to add other than I forgot to eat my ever expanding pot porridge for breakfast. It sits on my table ready to explode like a “Bouncing Betty” from the Vietnam War – I shall have to exercise caution later on. I might be safer on the bottom bunk tonight.