Last night I picked up the EN447 from Amsterdam. It does a weird route around Germany (including Dusseldorf, Cologne, Dortmund, Berlin and Frankfurt) before heading to Poland, and terminating in Warsaw. I appreciate that you don’t really “pick up” a train like a woman in a bar, but it makes it sound like I do this all the time, which of course I don’t.. Until last month there was actually a carriage that went all the way to Moscow, but this has now been cut in the Winter timetable.. 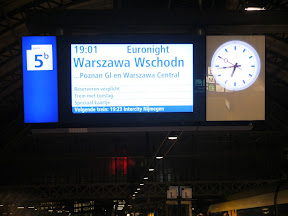 I had a 1st class Polish sleeper compartment all to myself last night. It’s supposed to sleep three, but I can’t see that working very well. Quite a few mod cons though – a sink, a wardrobe and 230v sockets amongst other things. For the record, it was carriage 180, berths 42,44,46. 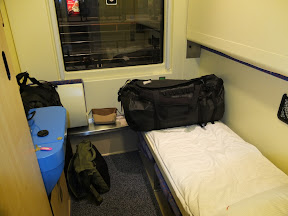 Talking “anorak” for a moment, the thing to understand with this train is that its actually about ten trains all going to different places. Throughout the night it kept on shuffling its carriages, both dropping off and collecting new ones. I even met a woman headed for Denmark via Hamburg, on the same train as me going East..

As I suspected, all that shuffling can lead to delays. Either I was having a bad dream or I heard an announcer in Berlin say we had been delayed two hours as the carriages from Basel were late arriving following “an incident” on the line.

Anyway it was a cozy night on board. The window opened at the top, but whilst the fresh air was good I soon realised that it lets the snow in too. I ate in Amsterdam before leaving at 19.00, so it was a couple of glasses of South African merlot and a movie – “The Runaway Jury”. I think I slept surprisingly well, which is a good sign for what lies ahead. 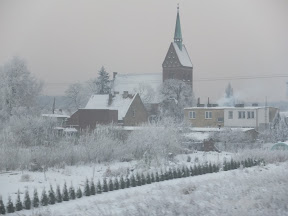 I woke this morning to a landscape of snow. Lots of it and absolutely everywhere.. Having bumped into a waiter on my trip for a morning constitutional (8/10, very clean) I decided to find the restaurant car that had been added as we reached Poland. I’m pleased I asked for directions, as I was about to head in the wrong direction. It’s worth also mentioning how narrow the corridors are on this train. I felt like an extra from the Great Escape last night pushing my luggage ahead of me in the tunnel. This morning I learned the correct etiquette for passing other passengers. Only Eskimos do this face to face, back to back being more acceptable. Like fish on a reef, people dart back into their compartments to let you pass when it looks like its going to be a tight squeeze i.e. most of the time when passing me! 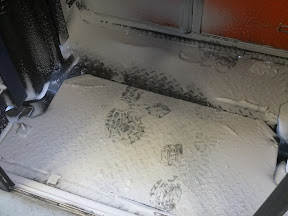 The other bit of learning before breakfast was the journey between carriages. The doors are pneumatic and open for about five seconds when the lever is pulled. Between the carriages is a “no mans land” of icy steel and this morning, snow. At first I though I might get stuck, as alarmingly the first set of doors close before you can reach for the second step. I’m going to need to practice more, gripping onto something as I do this in future. 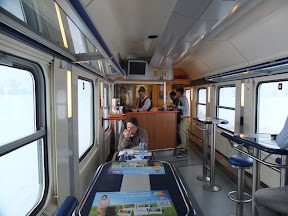 I could not believe my eyes when I finally found the restaurant car. Smiling uniformed waiters looking like they were expecting me. Proper coffee, sausages and scrambled eggs, served with a smile. Bravo PKP! 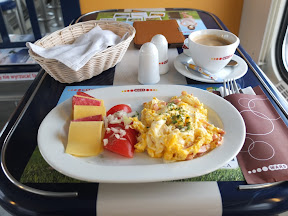 I have one bit of intel to report. I tried the “secret key” last night (see past post) and it I am pleased to report that it works perfectly. It appears to be standard across the Polish network. I had a smug moment before bed when I managed to unlock some spare bunk beds and liberate some additional pillows. I hope you don’t think I’m a bad person for doing this.. 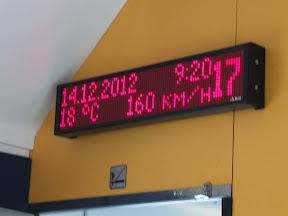 Anyway, I’m shortly about to pull into Warsaw Wschodnia, where with luck they have been holding the Moscow train (D405) for our late arrival. I best get packed up and my baggage near the door..