You might think from the above that its warmer today, but having spent a couple of hours out, I’m coming round to the view that the temperature is just a number and I can confirm without consulting a thermometer that its nippy enough to freeze solid any exposed bits.

I spent the morning shopping at the Ismailovsky outdoor market, where they seem to sell all the tourist stuff you would ever need at reasonable prices. There is also an area here that sells Soviet militaria – plenty of interesting stuff on sale, but most would lead to your detention if you tried to bring it back into the UK..

Then on to the Cosmanautics Memorial Museum, which is a fascinating place if you are a card carrying space anorak like me. 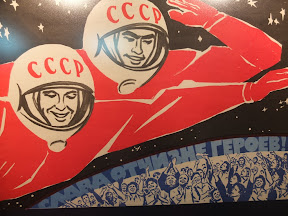 Too many pictures to post here, but just so you get the idea it’s packed with original space vehicles, mock ups and memorabilia. 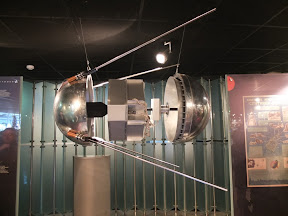 The original Sputnik – one of three versions to be found here.. 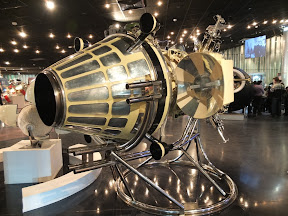 A model of Luna 9, which made a soft landing on the Moon in February 1966. I bet this inspired Gerry Anderson when he wrote “Space 1999”! 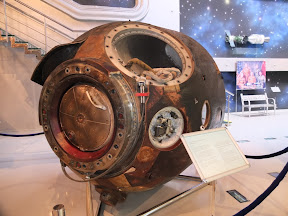 A recovered Soyuz capsule from 1989, looking a bit frazzled after re entry. 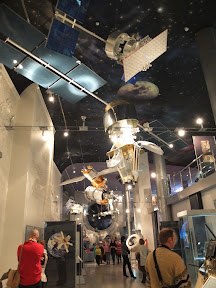 More rockets and satellites on display than you can shake a stick at. 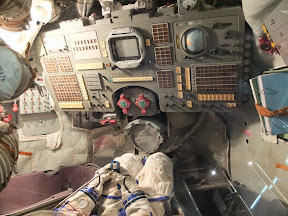 The controls inside a modern Soyuz capsule. You can compare this with an old Vostok that has a compass and that’s about it.

If you decide to visit Moscow, I hope this might be one for your list of things not to miss. Many of the signs are in Russian only, so if you really want to get under the skin of the Soviet space programme, I would suggest that its best to bring a private guide who can translate.. Its also worth noting that it is closed on Mondays.

On more general trip matters, all is going well. My visa registration hasn’t materialised yet, but its all in hand with the hotel. I gave up on using mad unlicensed taxi cabs today and started using the quite special looking metro. Each journey now costs about 30 Roubles rather than 1000 Roubles, and my life expectancy is much improved. The only snag is reading the stops in the cryptic alphabet, but its not too hard if you stay calm and make the odd guess based on how it is pronounced at each stop. In passing, I’m finding the shop signs here so alien that last night I was looking for a restaurant and ended up in a hair salon!

I think that’s all for now. I might not have time to post again before I board the big train on Tuesday, so I will post updates once I get some wifi, which might be Beijing. The reason being that I’m off to Monino on Tuesday (Air Force base) and I think I’m travelling from there straight to the railway station..

Have a wander round GUM – you'll be quite surprised.
Looking forward to catching up with you on… Wednesday (I'm off to Italy for lunch on Tuesday).

…blogspot.CH Are you coming to live in my part of the world by proxy?