Another good night’s sleep – I woke to the feeling of the brakes and fearing a “Crazy Ivan” as we pulled into Datong, our penultimate stop (bang on time). Not much to see on the platform or indeed the station, which was devoid of human life apart from of course about 20 guards from our train standing alongside their carriages. They were supervised as normal by our “C in C” and “RSM”, who clearly are now preparing for passing out parade at Sandhurst wearing their best dress uniforms.

I didn’t make it to breakfast (a shame, as it was free) but met up with some of the others for brunch in the new Chinese restaurant car. It’s different again, and not quite what I expected or ad hoped for. As you walk in you are actually greeted and semi directed to a table. We were served chicken balls (not chicken testicles, but chicken meat in dollops, so to speak) with rice and vegetables, which arrived about 30 seconds after sitting down. I didn’t see a menu – I think this was very much the only “dish of the day”. 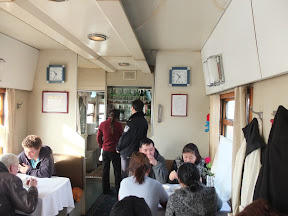 The carriage was cold but otherwise comfy. Our brunch was supervised by a policeman – I’m not sure if there was the possible risk of any noodle theft going on, but I felt safer knowing that he was there looking after me and my lunch. 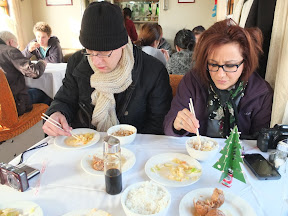 As well as Stephan and Ceyda not enjoying their lunch above, here is Christina and Anna from Finland, who were also on the train for the whole distance from Moscow. 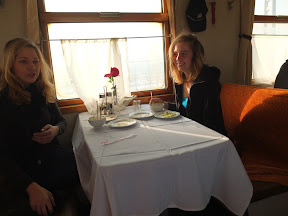 And also a couple of Germans from Munich (I’m sorry that I don’t know their names) who joined the train in UB. I understand from Stephan that they are on their way overland to the challenge of the normally closed China/Burma land border. Hard core! 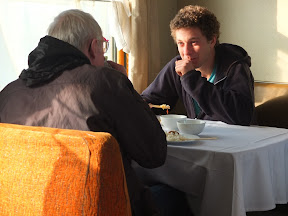 I spent the morning packing up whilst looking at the amazing views of mountains and gorges between the tunnels as we approach Beijing. 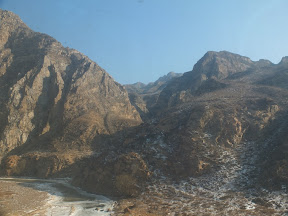 Guard A and Guard B have spent the morning preparing the carriage and cleaning various bits of the train. They seem happy enough – Guard B says that they have three days leave before heading back to Moscow on train 003.

Here’s the final shot for this leg – the Trans-Sib train at Beijing Central railway station today. I felt a quite a connection and really was sad to leave it, having lived as part of it for so long. 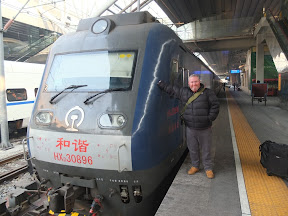 I have four days R&R now before travelling on the train to Shanghai for the weekend.